Here are the responses:

Benjy was most surprised at how confusing and frustrating the process of apartment hunting has been (more on that later).  The thing he dislikes about Hong Kong is how important status seems to be here.  Everyone is very interested in knowing what area of the city you live in; where your kids go to school; and what your job is.  It’s not that those things were non-existent back in Jax, but I guess it just didn’t seem as blatant as it is here.  What he enjoys the most so far is that, despite it being a hustle and bustle city, life feels slower.  We had lunch with some new friends a couple of days ago and we lingered for quite a while at our table.  No one was in a big rush to get anywhere and the restaurant staff wasn’t eager to turn over our table.  We just enjoyed each other’s company.  I found myself thinking a couple of times, “we need to let someone else have this table,” but no one else seemed to be concerned over our continued presence, so I just went with it.

Webley said that Hong Kong is like New York City, but she was surprised how much green space there is.  She enjoys that Hong Kong has plenty to see and do.  She dislikes all of the shoving and pushing on the MTR.  She is looking forward to seeing Sarah Grace (a family member in China) and visiting Hong Kong Disney.

Aaron said he was surprised at the amount of people who live here.  There are more people than he expected.  So far he has enjoyed the boat ride on the Star Ferry.  He dislikes the amount of walking.  He is looking forward to taking the trolley up to “the peak.”

As for me, the most surprising thing happened to me the first morning we were in Hong Kong.  I turned on my ipad and as per my usual morning ritual, I went to the Proverbs 31 website to read the daily devotional.  I tried several times, but could not get to the site.  I knew I was typing the web address correctly, but I could tell it was somehow being changed when I pressed enter.  Later, I mentioned it to Benjy and he said that he had heard that certain topics are censored (like Christianity) and that access to that website was probably blocked here.  What?  Things that make you go, hmmmm.  Since then, I’ve managed to get around the blockage by going through Facebook.  Heh, heh heh.

The thing I like the most so far about Hong Kong is the public transportation system.  It’s so easy to get around, even for a “directionally challenged” person like myself.  I love not having a car or being stuck in traffic (or in Jax, being stuck behind a train).  I dislike all the crowds, but I know that that will be something I will have to get used to living in a mega city like this.  I also intensely dislike not knowing the language.  It’s very disconcerting looking like I do (i.e., Asian) and then not being able to communicate at all with someone in a language everyone around me assumes I speak.  I find it a little embarrassing.  I’m looking forward to finding a church home, making new friends, moving into our apartment, settling in and, yes, taking language lessons.

Here are a few more pictures. 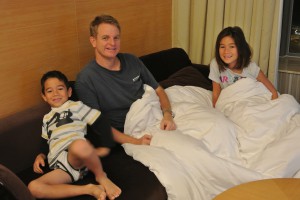 All the Auburn fans in the family woke up at 4:30 a.m. Hong Kong time to watch the SEC Championship game.  I suppose it was worth the early kick-off as the Tigers were victorious over Mizzou.  I’m no AU fan, but in my opinion Mizzou needs to get kicked around a few more years before they are worthy of holding the SEC title.  I would also like to thank Michigan State for defeating the over-rated Buckeyes and its traitor of a coach, Urban Meyer.  We’ll all be united as a family in rooting for AU over FSU in the national championship game.

Here are a couple of pictures I snapped in Sai Kung, the area where we will be living. 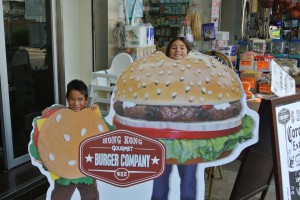 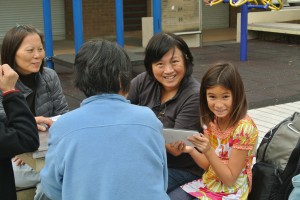 Fearless Webley introduced herself to a few of the local women who were busy doing origami.  The language barrier didn’t seem to bother her.  And here’s a picture of some older ladies doing a fan dance. 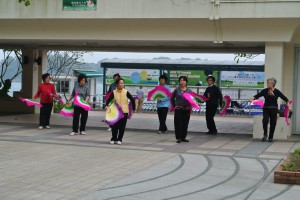