It rained for several days so we’ve been cooped up in our hotel.  The sun finally came out so I was able to take much better shots of the view from our hotel room. 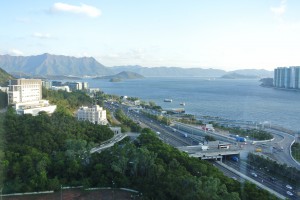 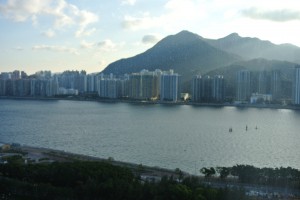 We are staying in an area called Sha Tin.  The body of water you see is Sha Tin Hoi, a cove at the mouth of the Shing Mun River which opens to Tolo Harbor.  The buildings you see across the cove are mostly all apartment buildings, housing for a portion of the 7 million people who live here.

During the rainy days, we were able to make good use of the time indoors by getting a few days of homeschooling under our belts.  Yes, I’m still doing that…living out of a suitcase….in a foreign country…no homeschool co-op, no libraries and with about half of my supplies.  The rest of my stuff is literally on a “slow boat to China.”  I am insane, I know.

The upside is that it seems that Benjy is starting to gain a greater appreciation for this homeschool thing.  With not much else to do and with nothing on TV in English except CNN, he’s become the math checker because I get sick of teaching it AND checking it. And he gets to help Aaron with his reading, which can sometimes feel like Chinese water torture. (I’m just killing it with all the China references!!) ;0)

It’s been 2 weeks since we arrived in Hong Kong and one thing has become glaringly obvious to me.  Team Woods is quite the public spectacle.  The scene usually plays out like this.  The kids and I board the MTR with Benjy following a few steps behind us.  Benjy is typically the only white guy on the whole train and is the tallest by probably 6 inches.  So, he immediately draws stares.  Focus remains on him until people take notice that Benjy acts just a little too familiar or too cozy with the kids, or the kids say something to him.  And then, it’s like, oh…. they (they, being the kids) are with HIM, the white guy.  Then, they look intently at the kids and you can see a sort of confused expression of “the kids look like they could be Chinese, but they are talking to this white guy.”  Suddenly…they notice me.  The pieces of the puzzle begin to fall into place.  “Oh, I must be the mom.  But, hey, she’s Chinese.  Or she looks Chinese.  Is she Chinese?”

For the record, both my parents are Filipino, but I think my dad’s grandmother was Chinese or part Chinese or something like that.  I’ve been told frequently throughout my life that I look Chinese.  This observation has come from other people who are Chinese themselves, not just from folks (bless their hearts) who use the term “Chinese” as a synonym for “Asian.” The looks rotate slowly from Benjy…to the kids…then to me a few times.  Chatter, chatter.  More looks from Benjy, to the kids, then to me.  I might say something to Benjy.  And then comes the “ah-ha moment” when the last piece of the puzzle falls into place.  “Oh, OK, I get it.  They’re American!”