One of the benefits of living in Hong Kong is that all of those places that once seemed so exotic and far away when we lived in Jacksonville are no longer so.  Well, I suppose they are still exotic, but far away, not so much anymore.

My sister came to visit us.  We decided to make the most of her being on this side of the planet by doing a whirlwind tour of mainland China.  We spent 8 days hitting the highlights of the country.  Trying to see China in 8 days is like going to the Grand Canyon, Disney World, Washington D.C. and New York City all in one week.  There’s just too much ground to cover in such a short period of time.  What do you see?  We settled on the obvious choices, the ones you’d be ashamed to come back from a trip to China and say that you didn’t see:  The Great Wall, Beijing and the terra cotta warriors in Xi’an.  Our last stop was a special request from Webley to see the great pandas at a reserve in Chengdu.

I’ve decided to do separate blogs for each location.  Webley will be a contributing writer in some of the posts.  Please indulge me with all the pictures.  Team Woods has never been the shutterbug sort, but on this trip I think I may have uncovered a new interest.  I suppose it was the stunning views from the Great Wall that provided the initial inspiration and I continued to snap away throughout the remainder of our trip.  I’m actually quite happy with some of the shots.

We flew into Beijing late one evening and arose early the next morning to begin our hike of the Great Wall.  Benjy was determined to stay away from those sections of the Wall with throngs of tourists, so he arranged a 2-day hike of portions that were located a 2-hour drive outside of Beijing.

When he was planning our trip, Benjy tried to convince me to opt for the hike that included camping overnight on the Wall.  He made respectable efforts to sway me by citing all the possible bucket-list check marks we could accumulate by doing so.  He nearly had me convinced, but I knew the mental picture he was painting for me was quite different from what reality would likely be (especially for one bucket-list item in particular).  After doing a mental calculation of such matters as no running water, no soft ground (we would be on the Wall, after all), and, most importantly, no toilets, I declined.  I’ve never been a bucket list kind of girl anyway.

We hiked for about an hour up a mountain to get to the Wall.  When we got there, we were met by a local villager in U.S. Army fatigues.  He was standing at the bottom of a ladder attached to the face of the Wall.  He reminded me of the troll under the bridge who wouldn’t let us pass without the secret password.  After some back and forth, our guide, Robert, took out his wallet and paid him some money.  After all of us made it up the ladder, Benjy asked Robert if that guy was shaking us down.  Robert responded somewhat sheepishly that the guy built the ladder, so we had to pay him to use it.

The first day of our hike was from Jiankou to Mutianu.  At this point, the wall was mostly unrestored and quite remote. 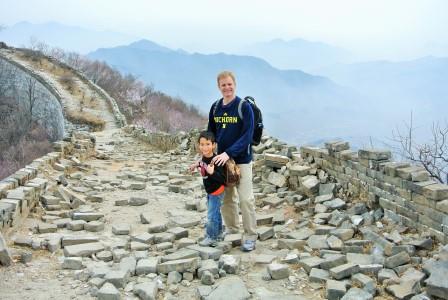 For most of the day, we had the Wall to ourselves with rare encounters with other hikers or villagers. 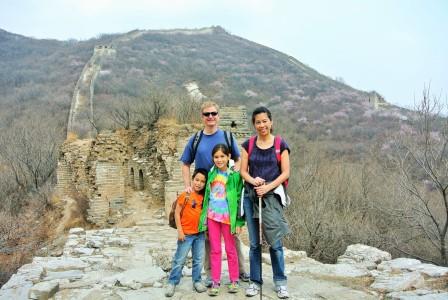 The wild cherry trees were in full bloom, the weather was cool and the sky was clear (sadly, a rarity in China, what with all the air pollution).  It really was a perfect day for hiking. 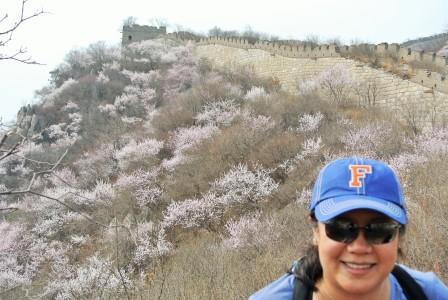 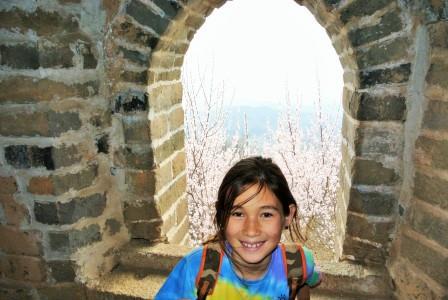 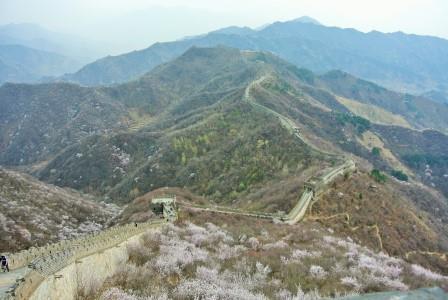 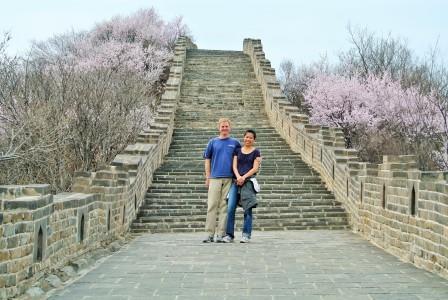 We stopped to eat lunch, but other than that we hiked non-stop.  The kids were troupers.  All-in-all, we hiked up and down steep inclines and declines for 6 hours. 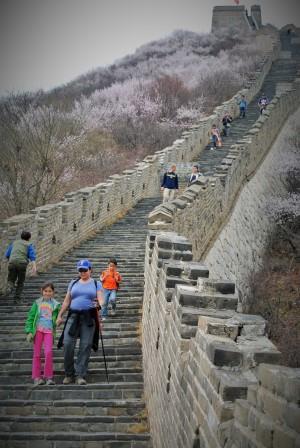 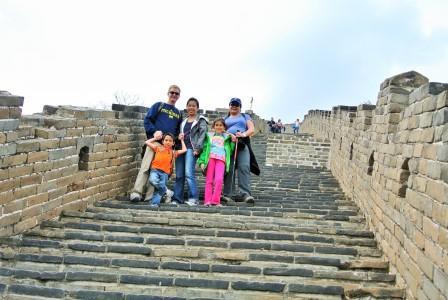 At the end of the day, our hired van picked us up and brought us to a local farmhouse where we spent the night.  I know that “farmhouse,” especially coupled with the phrase “small village in China” conjures up thoughts of primitive accommodations not much better than camping on the Wall and that’s what our expectations were as well.  As it turns out, the “farmhouse” was quite nice with private bathrooms (with toilets AND TP!), soft beds and food that was delicious and identifiable.  All bonuses in my mind.  It was a good thing, because we were all exhausted from the long hike.

The first two days we were in China, we were at the Great Wall.  With the two days combined, we passed about 50 watch towers and walked about 18 km.  That is about 1/300 of the whole Ming Great Wall. Okay, you are probably confused when I said the Ming Great Wall so I’ll start from the beginning.  In about 480 B.C., China was divided into seven kingdoms that were almost always at war with each other.  Finally in 221 B.C., the Qin (Chin) under the rule of emperor Huangdi conquered all of the other kingdoms and called himself the First Emperor of China.  This name might sound familiar because he made the terracotta warriors. That’s not all!  He also made the first Great Wall of China to protect China from the Mongols and the Manchurians.  Since it was a long time ago, most of that wall is no longer standing.  Then in 1368 A.D., the Ming Dynasty began.  During that time the wall was almost completely rebuilt.  About 3,600 miles was rebuilt. The next and last dynasty continued construction after the Ming.

Now that I have told you some of the history of the Great Wall, I’ll tell you what we did there.  On the first day, we climbed up a mountain to get to the wall.  Once we got up on the wall that part wasn’t restored so it was a little difficult for us.  We were also lucky because the cherry blossoms were in full bloom and this only happens two weeks out of the year.  Most of the wall we hiked wasn’t restored.  After we passed the unrestored parts, we came to the restored part.  It was hard on our sore legs because we had to climb 250 steps.  After the hike, we tobogganed down the wall to our van.  After the long hike, we had a two hour ride in the car to get to a farm house.  We spent the night at the farm house and got ready for the second day of our hike.