When we were planning our trip through mainland China, Benjy and I decided that we wanted to have an authentic Chinese experience. To accomplish this, we booked an overnight trip on a sleeper train from Beijing to Xi’an. This, in our minds, would achieve three things: (1) provide cheap overnight accommodations, (2) give a fun train experience for the kids and (3) afford us a look into how locals travel.  Well, our mission was certainly accomplished. (1) Travel on the train was truly cheap, especially compared to the average cost of a hotel in Beijing. However, as we all know (and what Benjy and I sometimes fail to remember), you get what you pay for. (2) To Aaron, this was the highlight of our entire trip through mainland China, and, as a 7 year old boy who loves trains, of course this would be the case. (3) It was truly a “Chinesey” experience.

Our room was at most 8 x 8 feet.  It had 4 beds in it and a tiny table.  Here is the only picture we took of our train experience. 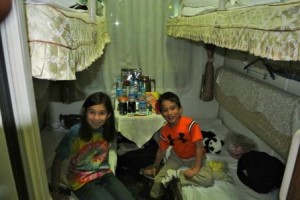 Our entire train car shared only one toilet.

I’ll take this opportunity as an aside to explain that in a mainland China bathroom, the most you can reasonably expect to get is either a squatty potty (which is basically just a hole in the ground) and TP OR a proper toilet, but no TP.  You just don’t get both.  Most of the time it’s BYOTP regardless of the hole versus toilet crap shoot (sorry I couldn’t resist the pun).   I don’t know why.  And I really question the assertion that China will take over the world as long as they cannot get the toilet situation worked out. Of course, this is all just my opinion and I know that cultures are different, etc., etc., etc., but to me, it’s really the difference between a third world country and first world country.  It’s not a stable currency; it’s not a solid middle class population; and it’s not a booming manufacturing industry.  It’s whether you can go to a toilet in an airport in a city so large and metropolitan that the Olympic Games were held there just 4 short years ago and not have pee splashing on your ankles as you squat precariously over a hole in the floor or have to stare at someone else’s poo that didn’t make it down the hole. I mean come on folks let’s get with the program.  You’ve already put the hole in the floor.  Just spend a few extra quay and throw the toilet on top of it.  Anyway.  Sorry.  I digress.

It is truly an extravagant luxury to have both TP and a toilet in a bathroom in mainland China.  The little toilet in our car had both, but extravagant luxury…not so much. There were at least 40 people in our car and only 1 toilet for an 11-hour trip. There were also only 3 sinks in which many people felt free to all but take a bath in and then not clean up after themselves. I’ll let you use your imagination.

A sleeper car has only 4 beds and wouldn’t you know that we had 5 in our party. Benjy, being the gallant gentleman that he is, took one for the team and took the single ticket for the room next door and shared it with 3 other strangers. Actually, there were 4 others because one man shared his bunk with his not so small and quite rambunctious 8-year old son. Benjy said that at one time during the night each of his 4 other roomies was using an electronic device, either listening to music, watching a movie, playing a video game or talking on the phone.  No one, however, was using ear buds. <sigh> I guess it’s a good thing Benjy has the ability to sleep through just about anything.

We made it to Xi’an early the next morning, un-showered, hungry and tired.  Our tour guide met us at the station.  He said, “oh you took the sleeper train.  Those are so nice.”  My sister and I didn’t say anything.  The kids, on the other hand, enthusiastically nodded their heads in agreement.  We got in the van and road to the terra cotta warrior exhibit. 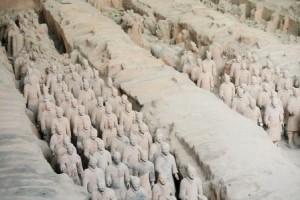 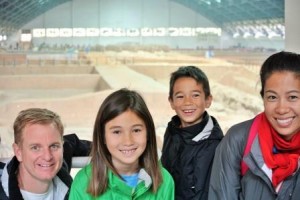 From 221 B.C. to 206 B.C., during the Qin Dynasty, the First Emperor of China, Huangdi, ordered that the terra cotta warriors be created for his tomb. 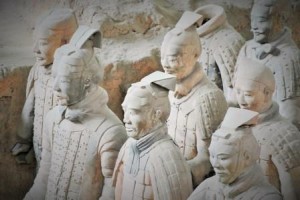 Huangdi believed that the warriors would protect him in the afterlife. 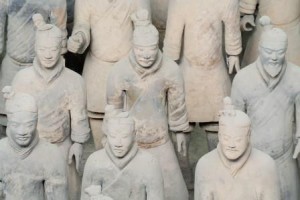 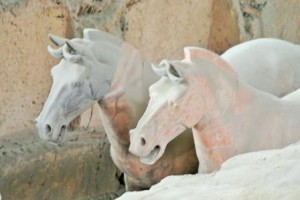 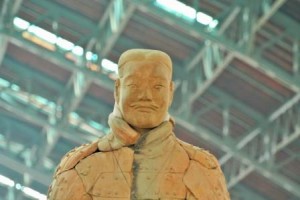 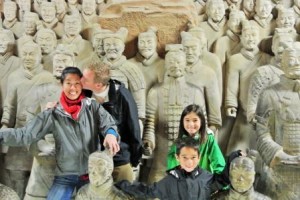 After we saw the terra cotta warriors, we toured other parts of the city of Xi’an, including Moslem Street which is known for it’s street food vendors and noodle shops.  We happened upon this enormous bun steamer that was outside of one of the restaurants. 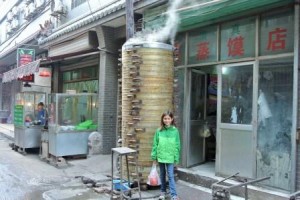