After our orangutan adventure, we had one more night left in Kumai.  We decided to splurge and stayed at an eco-lodge.  The eco-lodge was quite spendy relative to other hotels in which we stayed in Kumai, but 20% of the proceeds went to orangutan preservation, so we figured it was worth the splurge.  This is a picture of our cottage. 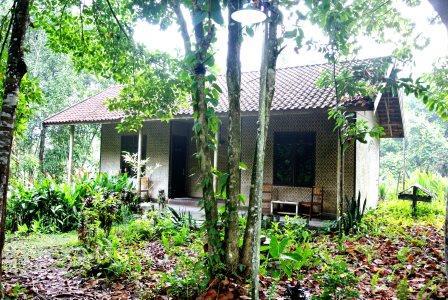 As you would expect from an eco-lodge, the building materials are made from renewable resources like bamboo. 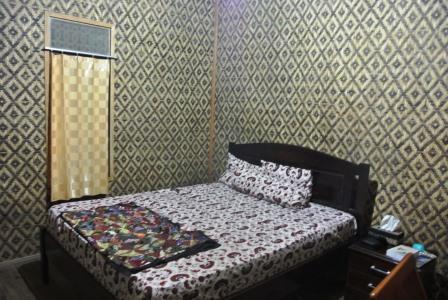 The walls were made of bamboo mats and were about as thick as one, too.  So, we could hear everything going on next door and vice versa.  The good news was that only the kids were over there, so we didn’t have to be too quiet and we could keep an “ear” out on them while having the privacy of our own room. 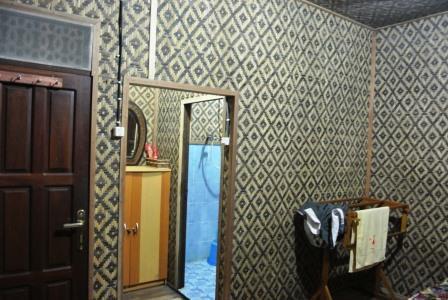 After spending 3 days and 2 nights on a boat, it was luxury living at the eco-lodge.  We had our very own bathroom with “fresh” water and a toilet.  Bad news: still no hot water.

The next day we had a cooking class with a young lady named Febri. 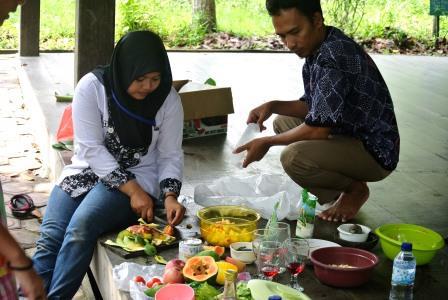 Febri is actually the oldest daughter of our tour guide, Joe.  She spent part of her life living on the orangutan preserve when Joe was a ranger there, so she knows almost all of the orangutans and they know her.  She works part-time as an orangutan guide.  She told us a lot of funny stories about the orangutans.

She taught us how to make a few dishes.  This one is a dessert with a variety of fruit. 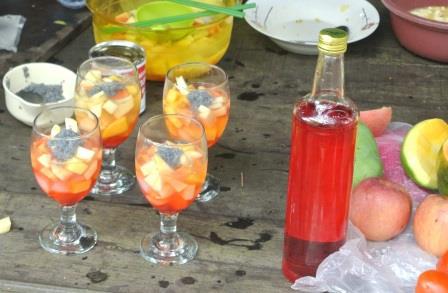 One thing that Benjy and I kept saying about Indonesia over and over was how kind, friendly and helpful Indonesian people were.  Complete strangers would go out of their way to help us.  Yes, we were tourists, but I’ve been a tourist in a lot of places and when I’m not with Benjy (which sometimes happens because we tend to travel to destinations separately)  I usually blend right in with the Asian population.  So, I can’t blame their friendliness all the time on the curiosity of wanting to get within close proximity to a white guy.

And I know I said Thai people were also kind and generous, but it really was doubly true about the Indonesians.  It’s something that I have found myself thinking about over and over: what makes a people friendly and kind rather than not.  I really can’t put my finger on it, but one thing that both Thailand and Indonesia have in common is that their culture is completely submerged in religion.  In Thailand it is Buddhism; in Indonesia, it’s Islam.

As I mentioned in a previous post, Indonesia is the largest Muslim country in the world.  There are prayer calls everyday, exactly 5 times per day, played very loudly across the cities on loud speakers.  One of the prayer calls is at 4:30 a.m., and let me tell you it’s so loud and piercing that no matter where you are, you are awakened by it.

I have spent plenty of time now in communist countries where everyday life is intentionally secularized and I have to say, there is a palpable difference.  Maybe it’s coincidence, maybe it’s not, but I find the people who live in secular societies to be much colder, distant and uncaring.  There’s something better about a society that is focused on a life other than this one.  To me, a completely secularized culture is not one to be desired or aspired to.  As the saying goes: be careful what you wish for.

Anyhoo, we had one last boat trip before we left Kumai. 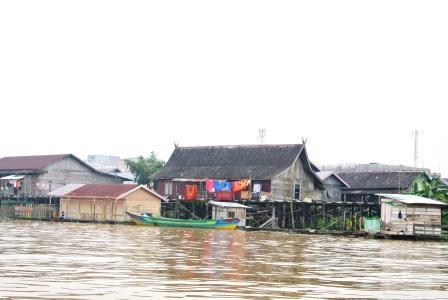 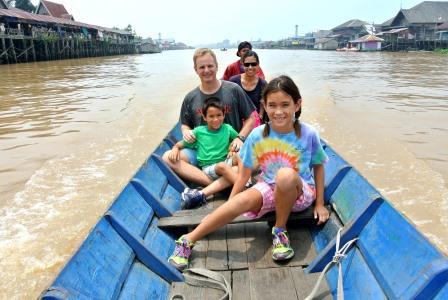 1 thought on “Indonesia: Odds and Ends”