After our meeting with Donny, we decided to explore other parts of Borneo while we were in the neighborhood.  What else does one do while in Borneo?  Well, a quick google search came up with orangutans.  It turns out that Borneo is one of only 2 places left on earth where orangutans can be seen living in the wild.  But, Benjy told me we’d have to travel 3 days on a boat down a river into a rainforest to get to them.  What’s not to like about boats, monkeys and rainforests?  We were in.

We had to travel to the small town of Kumai.

It’s the closest town to the Tajung Putting National Park, the preserve where the orangutans live.

We caught our boat out of Kumai.  This would be our home for the next 3 days and 2 nights.  The boat in the picture below wasn’t our actual boat, but it looked just like it. 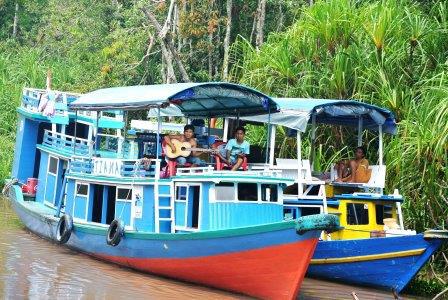 We occupied the top part where you see the guy with the guitar.

Aside from ourselves, the boat carried the captain (he’s the one hugging the kids), his assistant, the cook (and her 4 year old son) and our tour guide. 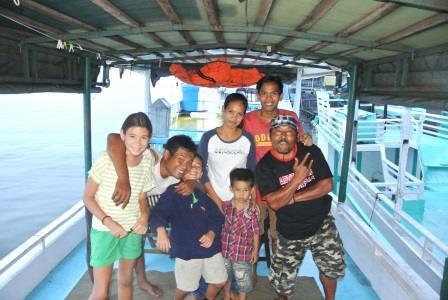 All of them shared the space below ours.  There was one bathroom on the boat.  We did have a toilet and a shower, but both functioned using river water, so no hot water. 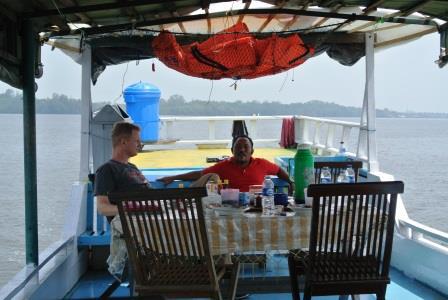 The guy in the red is “Joe,” our guide.  He used to be a ranger at the preserve and has a lot of knowledge not only about the orangutans, but also about all the wildlife on the river. and the other guides. 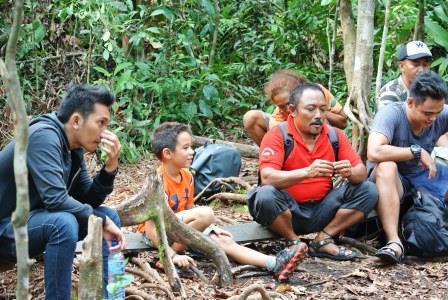 The captain of our boat was trying to learn how to speak English.  He enlisted the kids in helping him learn his ABC’s.  It was so cute to listen to him sing the ABC song and then mess up the order of the letters.  The kids would correct him and I was glad to see that they didn’t laugh at him or make him feel silly.  I guess we all know now what a humbling experience it is to learn a new language! 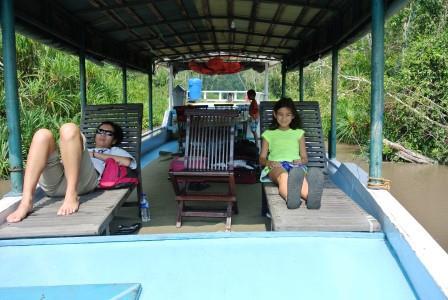 All of our meals were prepared on the boat by our cook, Eda.  She made traditional Indonesian food, which is quite spicy, but really good.  We ate all our meals at this table. Nice, don’t you think?  Indonesia is right on the equator, so it is in no way a chilly place, but these pictures were taken right after a rain storm, which cooled things off so much that we found ourselves digging into our bags for our jackets. 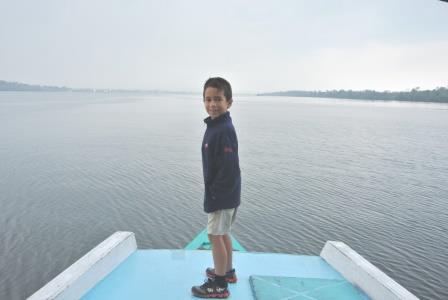 This is where we slept at night, under the stars, anchored on the river in the middle of the rainforest.  One night, we could see so many fireflies in the trees it looked as if the rainforest had Christmas lights.  It had the potential to be quite romantic….but for the 2 (human) monkeys sleeping right next to us! When we began our trip out of Kumai, the river was a muddy brown color. Joe told us that due to gold mining (which uses mercury to clean the gold) and the effects of deforestation, the river water is extremely polluted.  But, as we traveled deeper into the rainforest away from all of the pollution, the water turned a dark black color.  It looked almost like black coffee.  Oddly, the black water was more transparent and more reflective of the light than the muddy water. 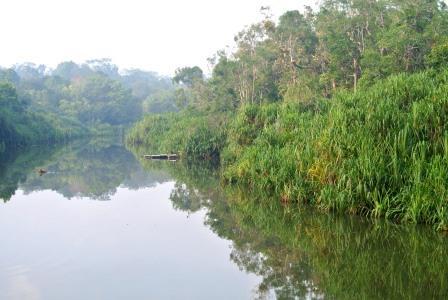 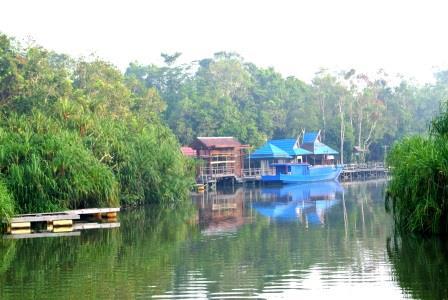 As we puttered along, we came upon this sight. 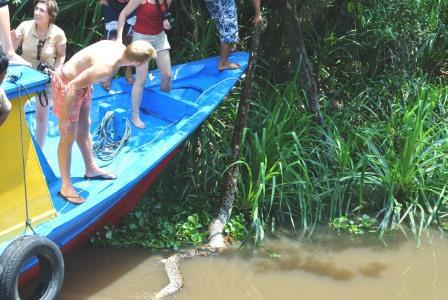 Yes, that’s a python.  It’s dead, though.  It apparently got into a fight with a crocodile.  We missed all of the excitement, but I guess it’s easy to tell who won.  We didn’t see the croc, except his bubbles.

Here’s a shot of the casualty with a bite in his side. 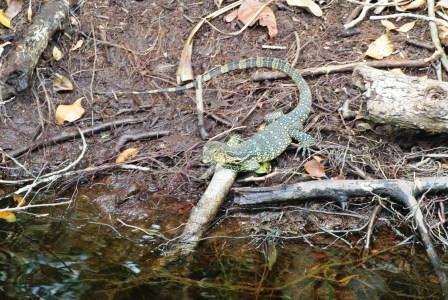 and other monkeys.  This one is called the proboscis monkey. I didn’t get a good shot of one, but dominant male proboscis monkeys have these big floppy noses. 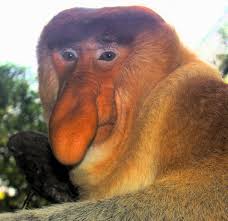 They come to the river around 5:00 in the evening and they are all just hanging out in the trees.  We were looking at them…looking at us…looking at them as we cruised beneath.  It was so cool seeing these animals in the wild and not in a zoo.

We stopped at a reforestation center along the river where visitors can help replant trees.  Joe told us that a few years ago he had the privilege of being Julia Roberts’ guide when she visited the preserve.  This was the tree she planted. Impressive, I know.  Here is the tree we planted. 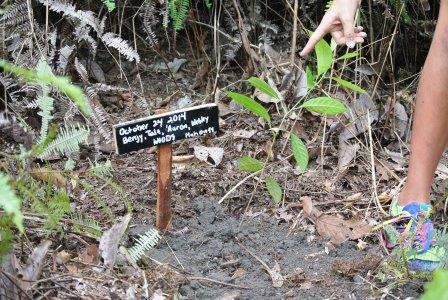 Next stop, the orangutans!