Yes, this is a bit delayed, but I decided to write about this portion of our trip to Cambodia separately, so it will be a rather abbreviated post.

On our last night in Phnom Penh we went to a restaurant that served extraordinary table fare.  One of their specialties is fried tarantulas.  Webley and Aaron have awarded me with the moniker “The Cupbearer” because, unlike anyone else in my immediate family, I’m usually game to taste just about anything once.  Since moving to Hong Kong, I’ve only become bolder because I figure:  someone enjoys eating it or it wouldn’t be on a menu, right?

I have to admit, however, when I first heard of the opportunity to eat fried tarantulas, I didn’t immediately jump at the idea.  That might be pushing the envelope a little too far, even for me.  But, I reasoned, most things seem to taste good if it’s battered and thrown into a deep fryer, so I figured I’d just give it a go.

Once your order is placed, you are welcome to meet your future appetizer.  Aaron and I were obliged to make their acquaintance. 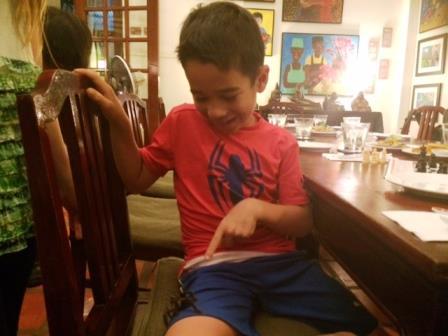 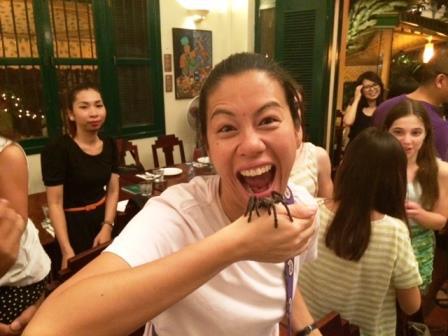 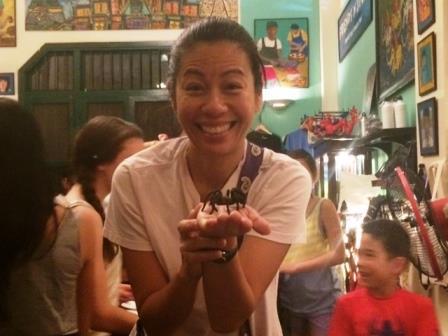 They were actually quite cute and furry and calm.  Poor things.  It is a bit morbid, I know.  I should also add that they were defanged right after they were caught.

Similar to the trained pigs that sniff out truffles, dogs are trained to sniff out tarantula nests buried in the forest floor.  I wonder how the spiders are then defanged after they are caught?  How does one hold down a tarantula without squishing him as you are pulling out his fangs?  He’s not just going to hold still for you to do that!  Are these really defanged?  Hmmmm…Things you don’t want to spend too much time dwelling on when you’re holding said tarantula in the palm of your hand and its eight beady little eyes are boring holes into your face.

So after a few minutes of up close and personal time, we bid adieu and the arachnids were whisked away.

Moments later….viola!  Fried buggers on a plate complete with a special dipping sauce made from the juice squeezed out of tarantula egg sacks (just kidding about the egg sacks, it was some sort of spicy/sweet vinegar thing). 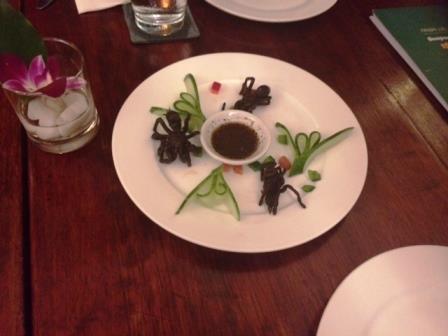 And the verdict is…they taste like chicken….just kidding again.

Actually, they are quite like fried soft shell crab and I have to say not bad, not bad at all.    One of the high schoolers on our team who had been to Cambodia previously said she preferred the pregnant spiders because they are “much meatier.”  I’ll keep that in mind for the next time.

In the spirit of “giving it a go,” this time, both Benjy and Webley went for it too.  They agreed it was pretty good.  Aaron, on the other hand, opted out.

1 thought on “Cambodia, Part 2– the Arachnids”