Benjy and I celebrated our 21st wedding anniversary with a quick getaway to Mui Ne, Vietnam.  We took a train from Ho Chi Minh City to Mui Ne. 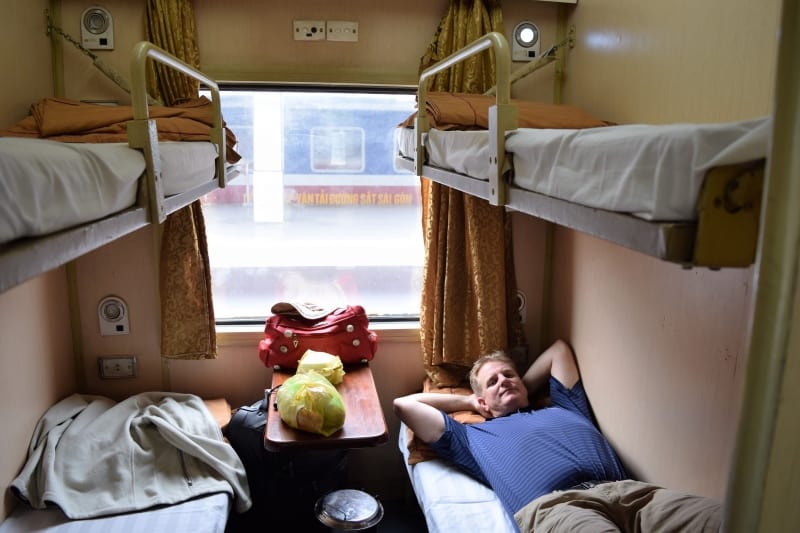 You can’t see them in this picture, but we did have two other Vietnamese roomies, a little ole lady who tried her best to communicate with us and an aloof millennial who never looked up from her phone.

As expected, the cars were tiny and the cleanliness a little off-putting–several cockroaches were crawling around while we waited to be underway.  But, on the upside, we had air conditioning and once the train started down the track the cockroaches disappeared.  Maybe they didn’t like all the rattling and racket from the moving train.

I’m constantly being reminded by Benjy that “this is an adventure.”

So we stayed at this really quaint boutique hotel.  It was right on the beach. 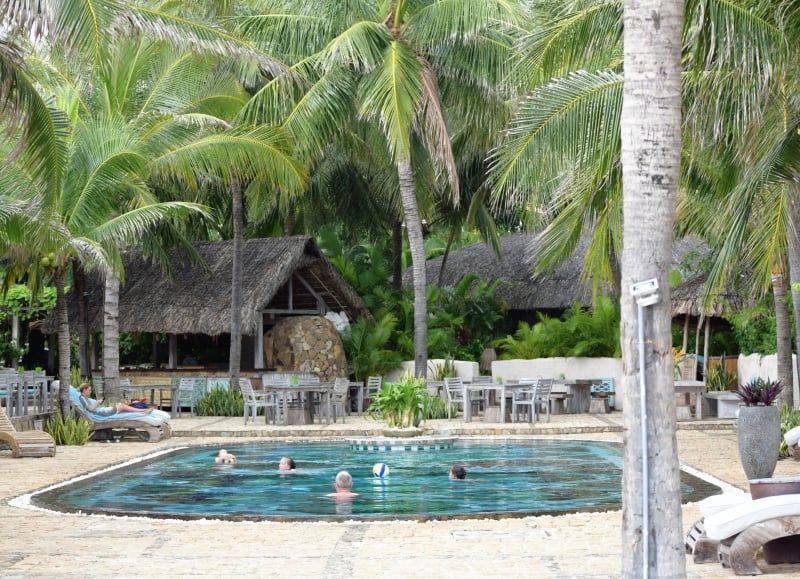 We rented a motorbike and explored the area.  Every morning the fishing boats come in with their morning catch. 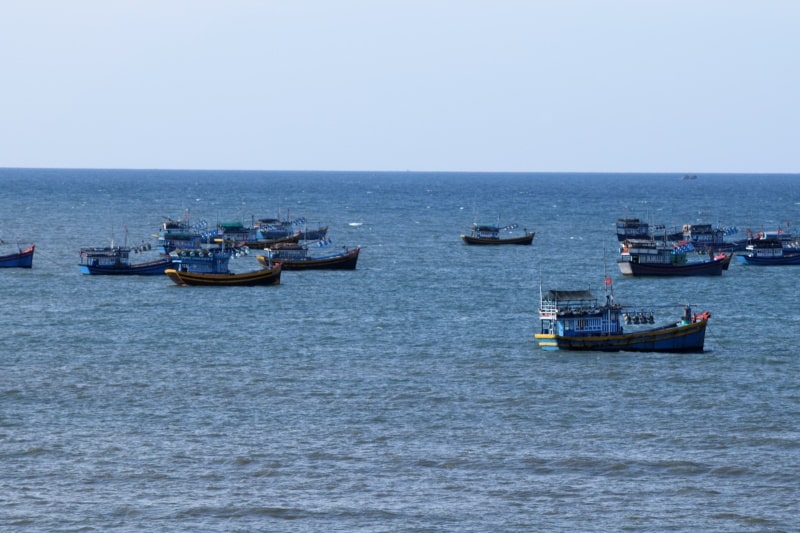 The fishing boats are really odd looking, completely round like a giant cereal bowl. 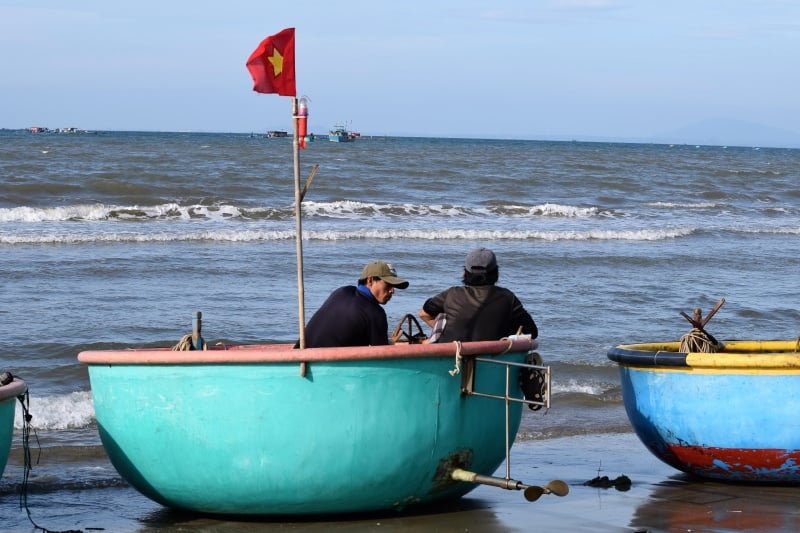 I heard that this was one of the last vestiges of colonization because back when the French ruled Vietnam they levied a tax on fishing boats.  The Vietnamese constructed these round- shaped vessels which I suppose were not considered to be boats and therefore exempt from the tax.

When the seafood Is brought ashore, workers sort through the catch to be sold at the fish market. 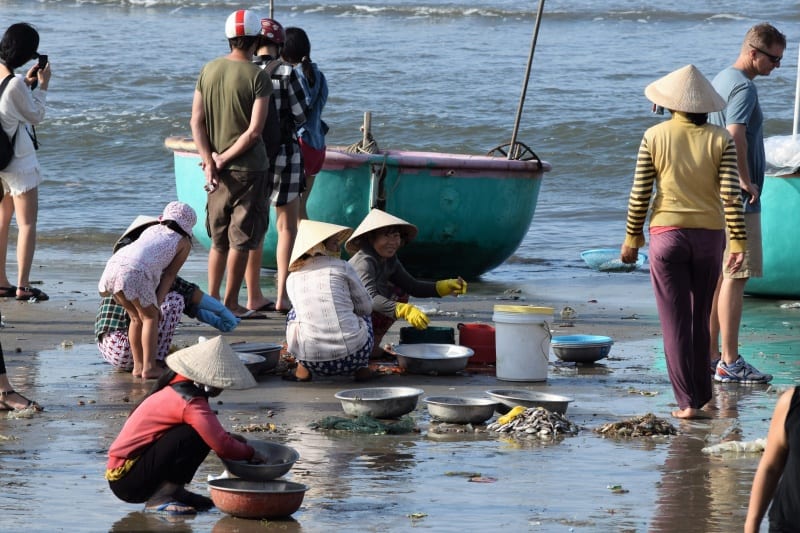 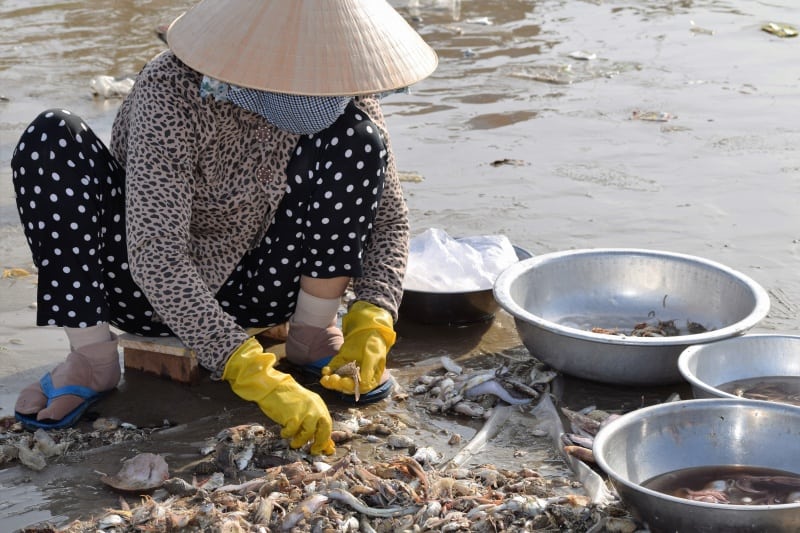 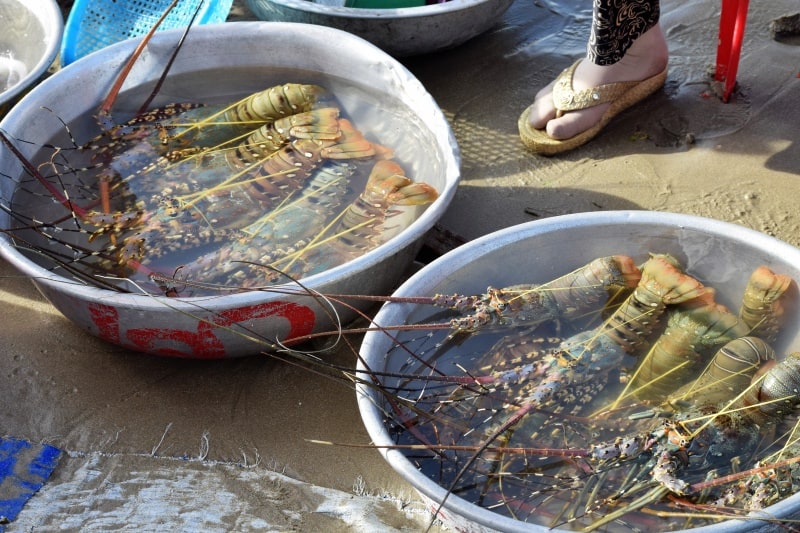 As Benjy and I were puttering around on the motorbike, we suddenly came upon a police road block.  We had heard that police like to pull tourists over to give them the old shake-down.  We very quickly deduced that that is exactly what we had stumbled upon because looking around, the only people sitting on the side of the road were tourists on hired motor bikes.  It was a motley bunch, from all over the world: Korea, South America, France, Germany, Russia.  Interestingly, we all spoke some English, unlike our captors who spoke very little of it.  Everyone was commiserating and sharing information:  what did they say to you? How much do they want from you?  Do you have an international driving license?

While Benjy and I were waiting our turn for the interrogation, another couple got pulled over and they parked next to us.  We exchanged a few pleasantries and then the guy asked us where we are from.  Benjy told him we were from the U.S. and then asked the man where they were from.  He said in a very thick accent, “From Rrrrrrussia!”  For some reason the four of us just burst into laughter.  I’m not sure what we were all laughing at.  Maybe it was the cold war thing, but it was funny nonetheless.

It was finally our turn and Benjy told me to let him handle it.  We pretended not to understand the very little English they spoke to us.  The head shake-down guy initially told us we would have to pay 1.3 million VND (about $57 USD) or he would take the bike.  Benjy shrugged his shoulders and told him, we didn’t have that much money on us so he could just take the bike.  Benjy was wagering they didn’t really want the bike.  They looked at us and didn’t know what to do.  We sat there and stared back at them for awhile.  Finally, the guy says, “OK how about 500,000 VND (only about $22 USD)?”  Benjy hemmed and hawed, but ultimately coughed up the cash.  The decision, however, left him in a bit of a sour mood afterwards.

He told me that while we were sitting on the side of the road, he was mulling over our options.  We could (A) make a run for it and jump in the next taxi that passed by; (B) throw a fit and refuse to pay the bribe; or (C) pay the bribe.

Option A seemed plausible because it didn’t appear that the cops had transportation either.  What’s more, the guy who rented us the bike didn’t even get our names and we never paid a deposit.  If we left the bike on the side of the road, we weren’t really out anything.  We could tell the rental guy to get his bike from the cops.  Option B–the white guy tantrum seems to work fairly well in Asia; it seems there’s nothing scarier to an Asian than a big angry white guy; or Option C, cough up the dough; it’s only $22; consider it the price of doing business.  Benjy reasoned that Options A & B had a greater than average chance of landing us both in jail.  And while spending our anniversary weekend in a Vietnam jail would certainly make the event memorable, it’s not exactly the memory-maker he was going for.  Benjy knew that Option C was really the only rational choice, but those who know my husband understand that willingly parting with his cash in such an unjust fashion is not necessarily a no-brainer for him; it’s  something akin to prying it out of his cold, dead fist.

Discretion being the better part of valor, he begrudgingly handed over the money.  We jumped on the bike and rode off into the sunset.  All is well that ends well.

Life truly is an adventure with Benjy.

In August, we went back to the land of my roots, the Philippines.  My sister came to Hong Kong to visit and went along.  My mom was already there visiting my grandmother so she met up with us.  My aunt, who lives there, also joined in on the fun.  It was a family reunion! 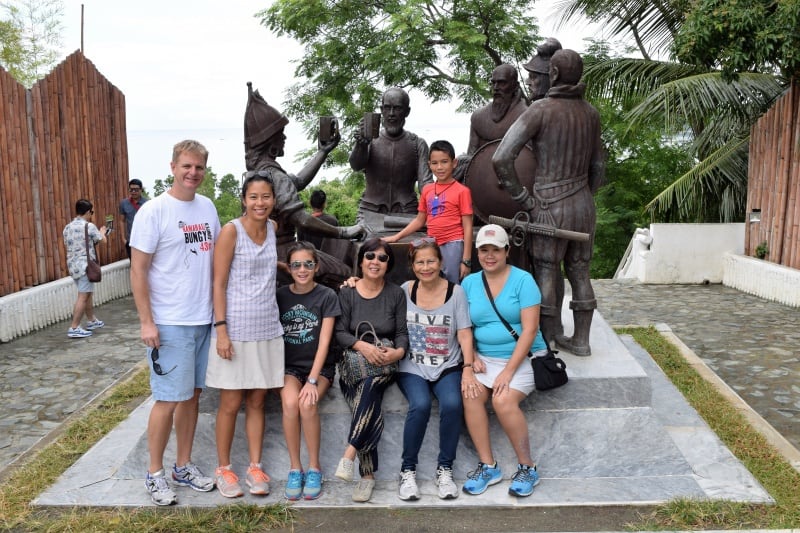 We rendezvoused in Bohol and spent some time at the beach, did some snorkeling and sightseeing. 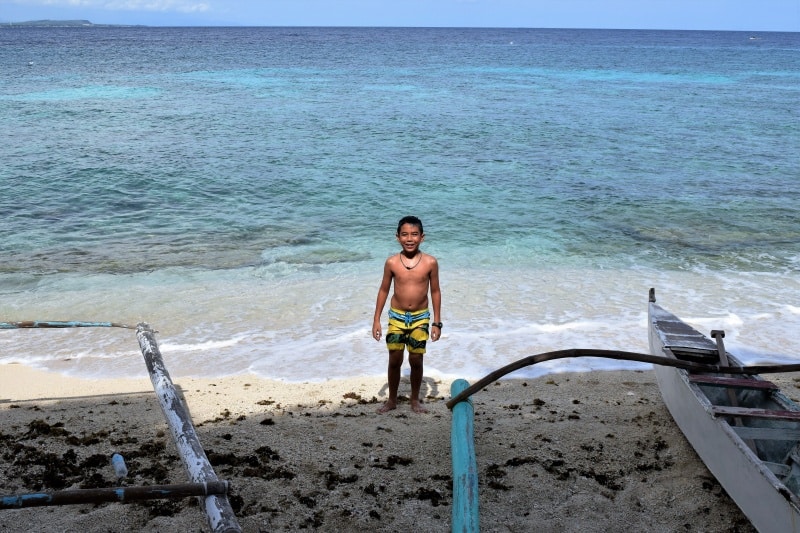 We had some really nice family time. 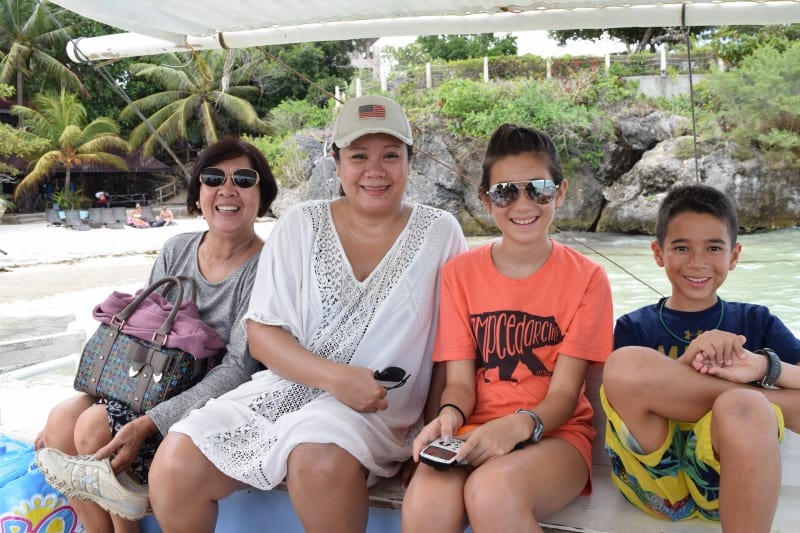 We visited Chocolate Hills, which are supposed to be a chocolate brown in color, but since it was the rainy season, the hills were quite green.  They were pretty, but not exactly what we were expecting. 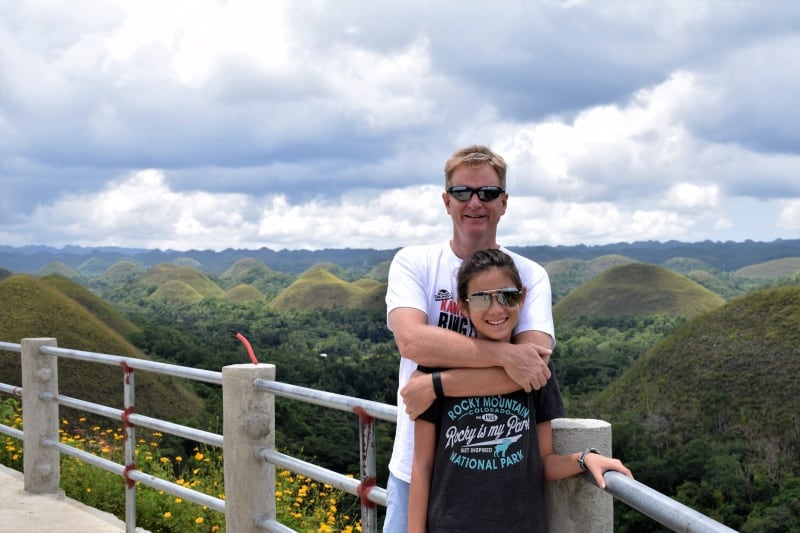 Then we stopped at a preserve to see the tarsiers.  Tarsiers are the world’s smallest primate.  A male tarsier only weighs about 5 ounces.  They are difficult to photograph because they hide under tree leaves and the lighting in the jungle is obviously not the best.  Flash photography is strictly prohibited because it literally scares them to death!  Here’s one little guy.  I love his tiny fingers! They have big buggy eyes, which is why I suppose they are so sensitive to the flash photography. Aren’t they adorable??  This one looks like he’s having a nice dream. From Bohol, we went to Cebu City, which is where my dad and aunt grew up. 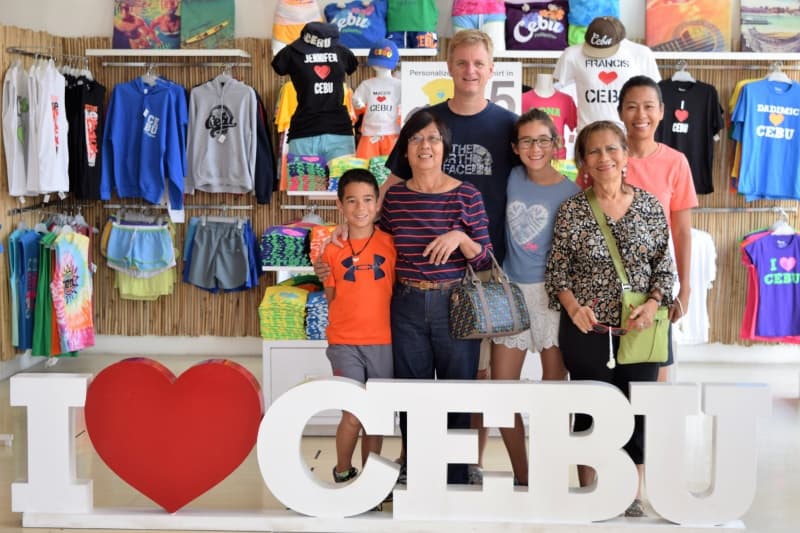 We did a bit of sightseeing in Cebu.  This is the site of the cross that Magellan planted when he landed in the Philippines in 1521.  The cross shown here encases the original cross planted by Magellan.  Magellan, sadly, wore out his welcome in the Philippines shortly thereafter. We also visited the gravesite of my dad’s parents. I never had the opportunity to meet my grandmother because she passed away before I was born.  My aunt told me that my dad was her favorite.  He was the baby of the family and she shamelessly spoiled him.  Here’s a picture of the Abangan children, each of them at graduation from university.  My dad is the one with the goofy hat. 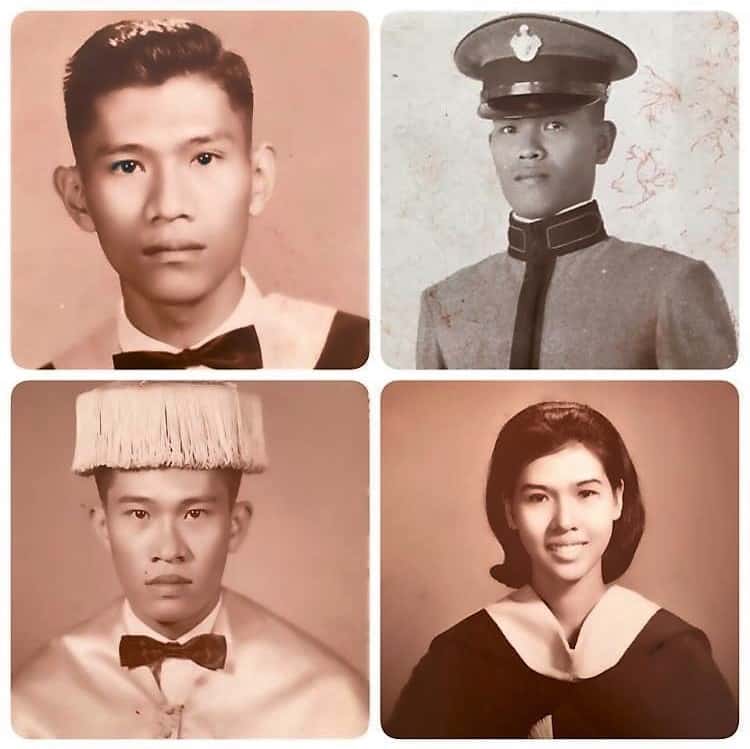 My grandmother scraped together centavos and borrowed money to send my dad to medical school.  When he went to the U.S. for his residency training, she passed away while he was there.  Now being a mother of my own little boy, that thought breaks my heart.  My dad rarely speaks of my grandmother, but when he does he still weeps.  Hearing my aunt tell me stories about my grandmother made me sad that I never knew her.  It also made me understand my dad a little better.