Well, it’s been awhile since my last post.  Sorry about that.  I’ve been a little delinquent in keeping up with my writing.  I’ll have to go back and finish up the last part of our summer road trip some other time.  I got burned out writing about it, maybe you got burned out reading about it.  Anyway, I’m moving on.

So, another year clicked by for me and I’m a year older.  Let’s just say I’m solidly middle-aged.  This birthday was extra special because my mom was here to help me celebrate it.  We took a quick trip to Macau.  Even though it’s a short 1-hour ferry ride, none of us  (including my mom) had ever been there.

Macau is famously known for its gambling.  It’s like Las Vegas of the Far East.  I haven’t been to Vegas since I was a small child and I don’t really remember anything about it, but Benjy says that Macau is cleaner and much less sleazy than its sister city in the west.  Sure, it has its own version of the strip, with glitzy hotels, opulent casinos, high-end shopping and mesmerizing shows, but the overarching prurient nature of Vegas seems less present in Macau, at least from my observation.

In front of the Parisian Hotel and Casino, there was a faux Eiffel Tower (or as Team Woods called it, the F’eiffel Tower.  As an aside, anytime there’s a fake version of something we add an “F” to the name, for example, a fake Gucci purse is a “Fucci”, knock off Beats headsets are “Feats,”  phony Ugg boots are “Fuggs.”  You get the picture. I know, we are hilarious.) 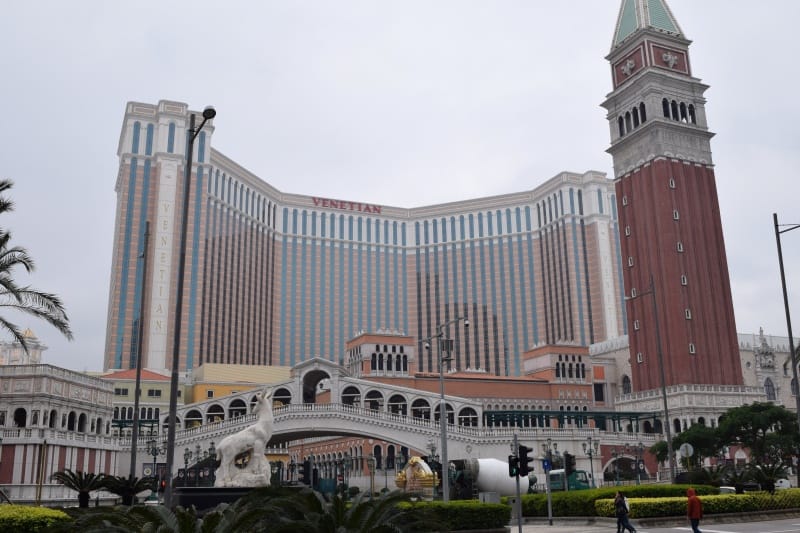 There was also the Venetian Hotel, complete with canals flowing throughout and Italian-looking gondolas cruising up and down.

As swanky as the strip was with its flashy lights and extravagant attractions, none of that brought us to this city.  Team Woods, gamblers we are not.  History, on the other hand, now that’s something we can all get into in our nerdy kind of way.

Macau was a Portuguese trading post settled in the early 1500’s.  Thereafter, it became a de facto colony of Portugal and was governed as such until 1999 when the Portuguese handed sovereignty back to China.  Like Hong Kong, Macau is now governed as a SAR (Separate Administrative Region) of China.

Away from the flashy and modern strip remain remnants of the Portuguese settlement.  It’s interesting to see the early European architecture… 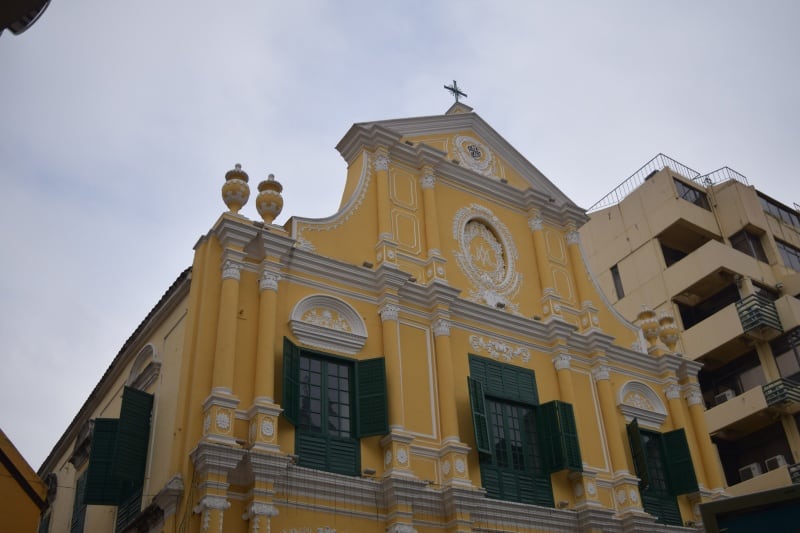 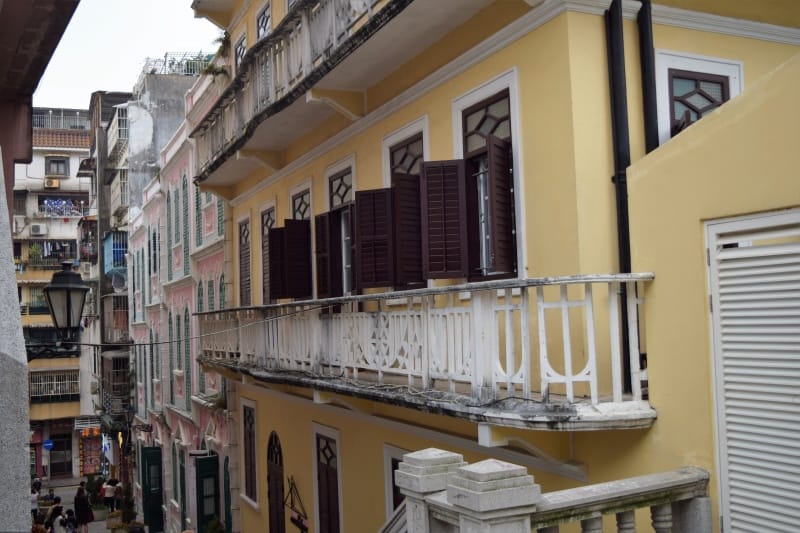 …amidst the Chinese culture.  I think the east meets west fusion is fascinating especially considering the number of centuries it has endured. 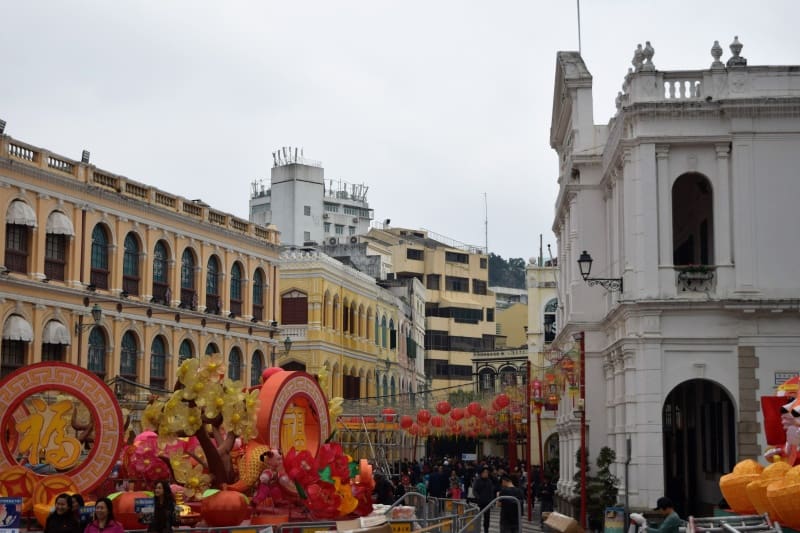 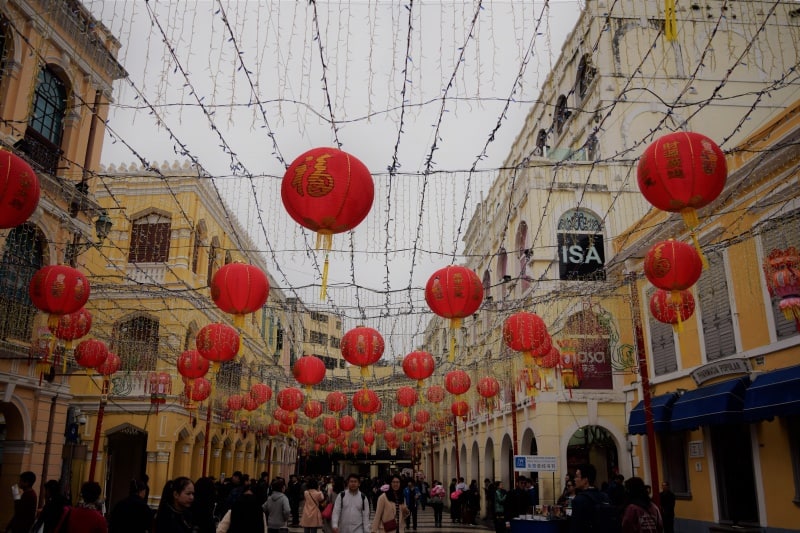 The Eurasian combination is most apparent in the road signage which is made of classic Portuguese tile.  On the tile is imprinted the street name, Patio da Cabaia, in both Roman letters and Chinese characters. 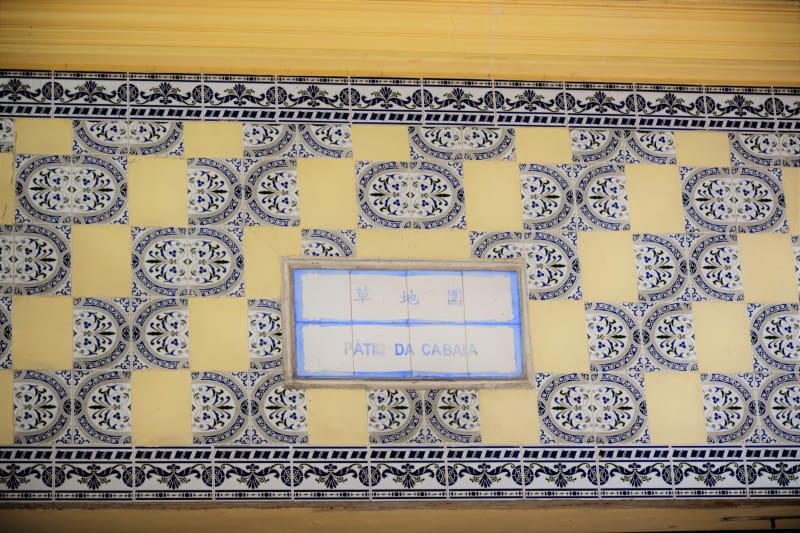 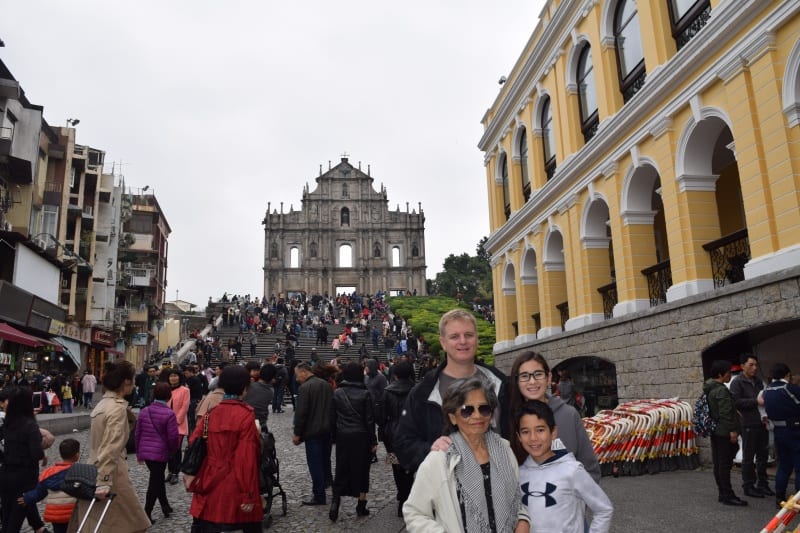 Another pleasant surprise is that my Uncle Pete happened to be visiting his wife’s niece in Hong Kong.  We met up for lunch in Macau. 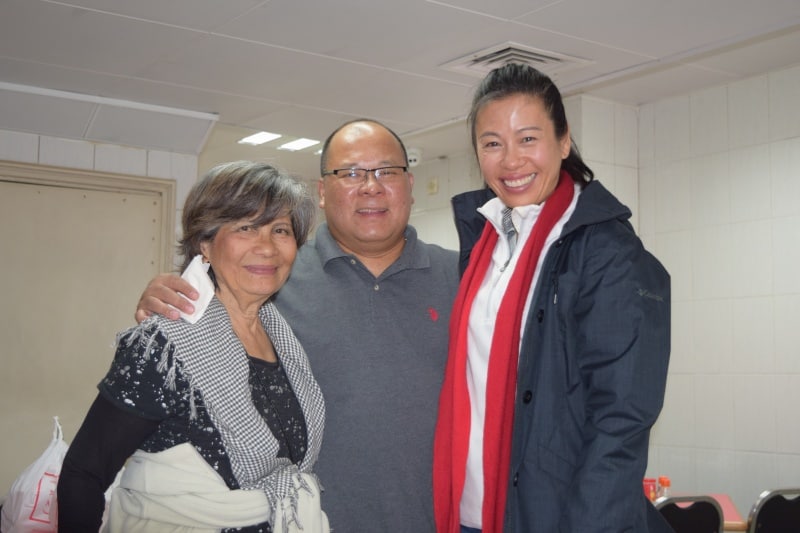 Uncle Pete used to live with us when I was between the ages of 6 to 8 years old.  At the time, he was only about 18 years old and he drove me CRAZY!!  This was the late 1970’s and Uncle Pete was a self-taught disco dancing extraordinaire.  John Travolta was his idol.  He practiced his fancy dance moves in our living room while I sat and watched from our fireplace hearth.

I remember he’d twirl around and ask me, “How do I look, Ta?  How do I look?”  I would heckle him and ask, “who taught you how to do that, Uncle Pete?”  To which he would proudly respond, “I taught myself!”  I’d just groan and roll my eyes.  He is fully to blame for my ability to recall all the lyrics to the songs on the Bee Gees’ album “Saturday Night Fever.”

One of the things that sent me into a rage back then is that Uncle Pete took FOR. EV. ER. in the bathroom as he got ready for a date, blow drying and styling his black flowing locks until he was perfectly coifed.  I would bang on the door and scream at him “Hurry up Uncle Pete!!! I need to use the bathroom!!”  After what seemed like hours, he finally emerged enveloped in a cloud of steam, hairspray and after shave.

Being the pesky little sister type, I rummaged through his drawers snooping for anything incriminating and spied on him while he made out with his girlfriends.  I’m sure I was a royal pain in his rear too!

It had probably been over 30 years since I last saw Uncle Pete and we laughed hysterically as we reminisced about those days.  I forgot how much I missed him! 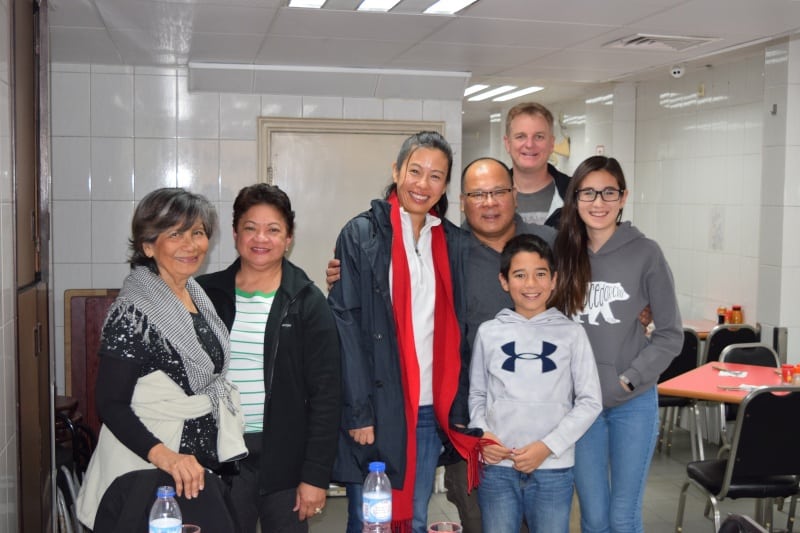