From Normandy, we hopped onto another train and headed to our next stop, Bastogne, Belgium.  Bastogne is located near the border of Luxembourg, so we couldn’t resist getting this picture of the kids standing in the two different countries at the same time. 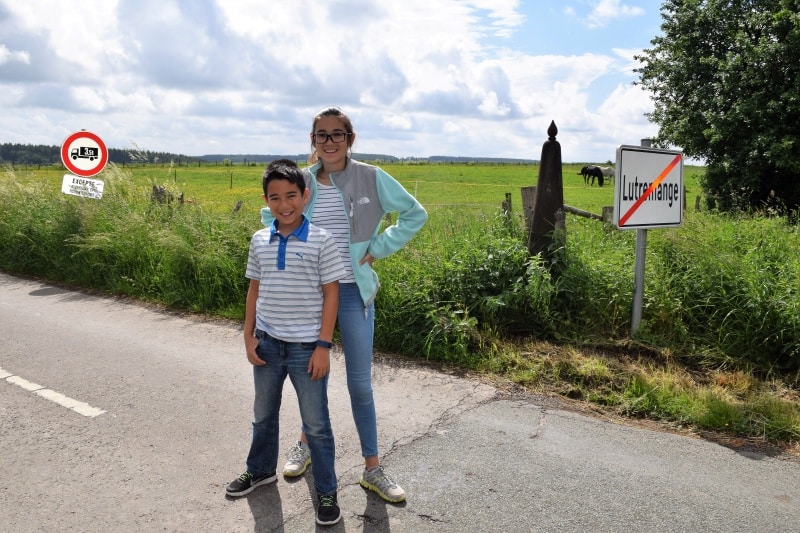 We traveled to Bastogne to learn about the Ardennes Offensive and its most famous battle, the Battle of the Bulge.  The Ardennes Offensive was launched by the Germans towards the end of World War II.  The attack was essentially Hitler’s last ditch effort to defeat the Allied Forces. The seven main roads of the Ardennes all converged at the tiny town of Bastogne.  The 101st Airborne was sent there to prevent the Germans from seizing control of such vital infrastructure.  It was here that the Battle of the Bulge was fiercely fought.

On December 21, 1944, the Germans succeeded in surrounding Bastogne, completely cutting off the 101st Airborne.  These American soldiers were outnumbered 5-1 and lacked cold-weather gear, ammunition, food and much of its senior leadership.

We visited the site in the Ardennes forest where the 101st Airborne valiantly fought the Germans despite their lack of resources.  You can still see some of the foxholes. On December 22, the German commander sent a messenger to Brigadier General Anthony McAuliffe with the following demand to surrender:

“To the U.S.A. Commander of the encircled town of Bastogne. The fortune of war is changing. This time the U.S.A. forces in and near Bastogne have been encircled by strong German armored units…There is only one possibility to save the encircled U.S.A. troops from total annihilation: that is the honourable surrender of the encircled town. In order to think it over a term of two hours will be granted beginning with the presentation of this note. If this proposal should be rejected one German Artillery Corps and six Battalions are ready to annihilate the U.S.A. troops in and near Bastogne. The order for firing will be given immediately after this two hours term. All the serious civilian losses caused by this artillery fire would not correspond with the well-known American humanity.”

General McAuliffe’s famous response to this ultimatum was, “NUTS!” The messenger translated the terse response to the German commander as “Go to h*ll!”

That night the Germans pummeled the Americans, but the Americans stubbornly maintained their position.  You can still see bullet pocks on the buildings from the fierce battle. With the help of General Patton’s tanks, the 101st Airborne succeeded in repulsing the German assaults.  On December 27, U.S. forces broke the encirclement of Bastogne. Many believe General Patton and his tanks came to the rescue of the American forces at the Battle of the Bulge.  The members of the 101st Airborne, however, vehemently deny that assertion and passionately maintain that they didn’t need any rescuing. We bid a fond adieu to Paris and boarded a train.  Our next stop was Bayeaux to tour the beaches of Normandy.  Team Woods, we are a history-loving family, and World War II history is specifically intriguing to Webley and Aaron, especially the war fought in the European Theater.  Our tour of Europe was thusly focused and much time was allocated to learning about the D-Day Invasion.  We’ve all read numerous books on the subject and watched many old movies.  It’s a definite benefit of homeschooling to be able to focus time learning in depth the topics in which the kids are interested.

But before we fully plunged ourselves into all things D-Day, we made a quick stop to Mont St. Michel. Mont St. Michel is an island topped with a medieval monastery.  It was one of the most important Christian pilgrimage sites from the 8th to the 18th century. There’s not much more to say about it other than it was beautiful and interesting to visit.

And with that our D-Day immersion commenced. “You are about to embark on the Great Crusade, toward which we have striven these many months.  The eyes of the world are upon you. The hopes and prayers of liberty-loving people everywhere march with you.” We took a guided tour of the Normandy American Cemetery…. ….and Utah Beach and Omaha Beach It is hallowed ground, this place. When you read about D-Day and the year-long preparation and training that went into it, you can’t help but be amazed at the audacity of the operation.  With 156,000 allied troops (nearly 100,000 American), it was the largest seaborne invasion in history.  I can’t comprehend the burden General Eisenhower felt as he debated the timing of the attack.  Sure he relied on the wise counsel of his advisors, but ultimately it was his call alone; it wasn’t President Roosevelt’s, nor Churchill’s, nor General Montgomery’s decision.  It was Eisenhower’s and it’s been written how prayerful and contemplative he was in making his verdict.  That kind of courageous leadership is astounding to me.

And when you consider how truly the stars aligned perfectly for the invasion: the horrible weather and then the brief reprieve; the absence on the day of the attack of General Rommel and all the German superior officers;  the lack of German Panzer tanks on and around the beaches; the delay of Hitler’s staff to notify him of the invasion; the loss of German air power over the English Channel, the list goes on, it’s clear that God’s sovereignty pervaded that moment in time.

It also struck me that over 60% of the troops landing on Normandy that day were American.  This was not their country; this was not their war.  It reminded me of a time a couple of years back when I was at a dinner party here in Hong Kong and was introduced to a French guy.  When he discovered I was American, he chided me that the Americans failed to help France during the French Revolution after France had so generously aided America in its fight against the British in the American Revolution.  I was taken aback that someone would hold me (whose ancestors were clearly not American at the time of the American Revolution) accountable for the failures of say Benjamin Franklin or John Adams.  I quickly (and hopefully tactfully) shot back that perhaps the Americans made up for it during World War II and…y’know…that whole D Day thing.  He instantly changed the subject.

The next day we focused our attention on the 101st Airborne Division.  We are big fans of the HBO series “Band of Brothers” as well as the Steven Ambrose book likewise titled upon which the show is based.  We took a guided tour called “The Band of Brothers Tour.”

Other than the 4 of us, there was one person in our group who was also American. Our tour guide was a youngish French guy probably in his early to mid 30’s.  We were driving along in our tour van and without any prompting or questioning from any of the Americans, our guide launches into this explanation as to why the French surrendered so quickly to the Germans and succumbed to occupation for nearly 5 years until the D Day invasion.  This guy seemed compelled to provide to us Americans a justification for their capitulation.

His explanation started with the fact that many French soldiers were killed trying to protect the Maginot Line, so when the Germans invaded, France essentially was defenseless because most of their army had already been decimated.  From there he rationalized that the average French civilian was just trying to live his or her life without conflicts.  Sure they were not pleased with the idea that Germans had invaded and were occupying their country, put their people under martial law and terrorized them for five years.  But, they weren’t soldiers so what were they going to do about it?  They kept their heads down and just lived their lives.

Not wanting to get into an argument, Benjy and I just shrugged our shoulders and said, “hmmmm.  m’kay.”  We were both thinking that the French response to Germany’s invasion would be much different in the U.S.  From our perspective, we believe that the average American, especially now, and probably even back then, would not idly stand by and watch his country be invaded and occupied without a bitter fight to the end.  Granted the Atlantic and Pacific Oceans provide the U.S with significant obstacles for any invading force to overcome.  But my guess would be that if a foreign country tried to invade the U.S. now, even as intensely divided as its people currently are, you’d see most everyone including the gangstas in the ‘hood pulling out their 45’s, or whatever they had, in her defense.  So, we didn’t buy the whole “we just wanted to get along” logic.  Anyway, we’ve had enough tour guides to know to take what they say with a grain of salt.

Getting back to our tour….we stopped at the location depicted in the second episode of Season 1 of Band of Brothers where Easy Company takes out German artillery to enable the D Day invasion forces to land on the Normandy beaches. The artillery guns are long gone and so are the trenches, but the centuries-old, menacing hedgerows are still there.  You can see them on the right side of the photo.

We visited the church in Sainte Mère Église made famous by the movie, “The Longest Day.” For the benefit of the tourists, a mannequin is kept hanging from the church steeple in remembrance of the paratrooper, John Steele, whose parachute got caught during the D Day invasion.  Steele hung there while pretending to be dead as the clanging church bells shuddered through his body for hours.  He was a member of the 82nd Airborne Division and not the 101st Airborne.

We visited little chapels that paid homage to the liberating paratroopers. We also stopped to visit a D Day Museum in Sainte Mère Église.  And here is where it got a bit interesting.  Our visit to Normandy took place a week before the annual D Day celebrations.  While we were at this museum, we happened to be there at the same time as a German paratrooper platoon.  We knew they were German because they were all fully dressed in their uniforms and they were speaking German.

The museum had an interactive simulation of an American paratrooper platoon jumping on D Day.  Somehow, we found ourselves placed in the same group as this German platoon.  So, here we were in this simulation surrounded by German soldiers and we first listened to the “Win One for the Gipper” speech given by an American commander.  He gave a rousing speech rallying the troops to fight for freedom against the “evil fascist German Warmacht.”  If that wasn’t awkward enough, then we climbed inside the belly of a mock C-47 airplane to replicate the actual jump.  I snapped a photo of us during this experience. Yep, here we were among the Krauts during our D Day experience.  I have to say that it sort of put a damper on things and I personally felt uncomfortable.  I wonder if they felt awkward, too?  I don’t know how we got ourselves into this situation, but I suppose it made the day all the more memorable.