There were plenty of things that I loved about Japan.  The streets are clean and everything is orderly.  The people are extremely polite, gentle and dignified.  Walk into a store or restaurant and people bow and greet you warmly.  When you leave, they bow again and bid you farewell.  As we drove through a toll booth, even the toll collector bowed to us graciously and greeted us as we gave him the money.  Imagine doing that all day long!!  All the formality probably gets tiresome after awhile, but for the short time we were there it sure was a nice break from the every-man-for-himself life we have grown accustomed to in Hong Kong.

I’ve given it much thought since we returned from there and I have decided the thing I appreciated the most about Japan is:

Yes, I know that seems odd and trivial, but, for me, it is the honest truth.

The toilets are state-of-the-art and are demonstrative of the extreme civility of the Japanese people.  I have never seen (nor thought of, for that matter) such technology.  My first experience with a public toilet in Japan was in a Mister Donut Shop.  Donut shops in Hong Kong are non-existent, so for Benjy and me it was like we were moths flying into a flame.  While we were there noshing our pastries, nature called.  First off, the actual bathroom is spotless.  I mean, you seriously could eat off of the floor it is so sparkling clean.  As soon as I sat down on the commode, I started to hear gentle music and the sound of flowing water like a babbling brook playing from this panel.  A motion sensor turned it on automatically. 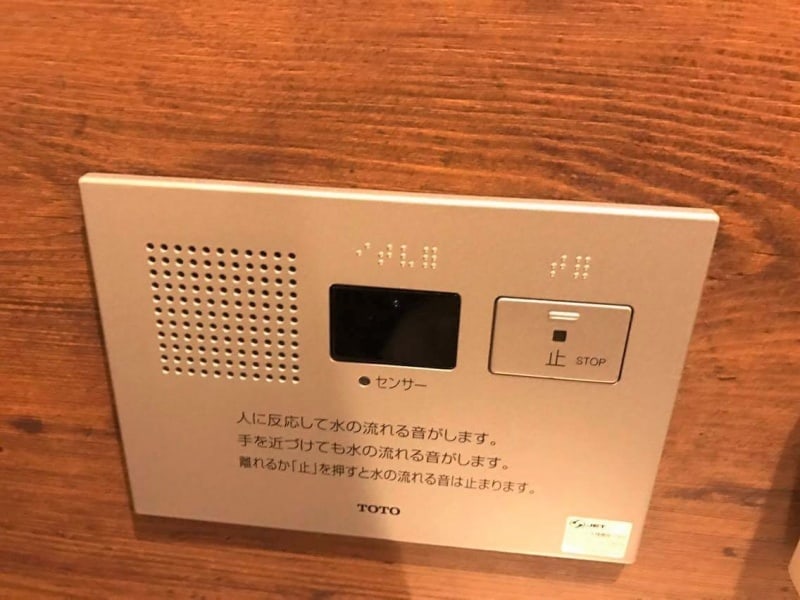 Next, I noticed that the potty is nice, warm and toasty.  Then, I looked at the wall and saw this: 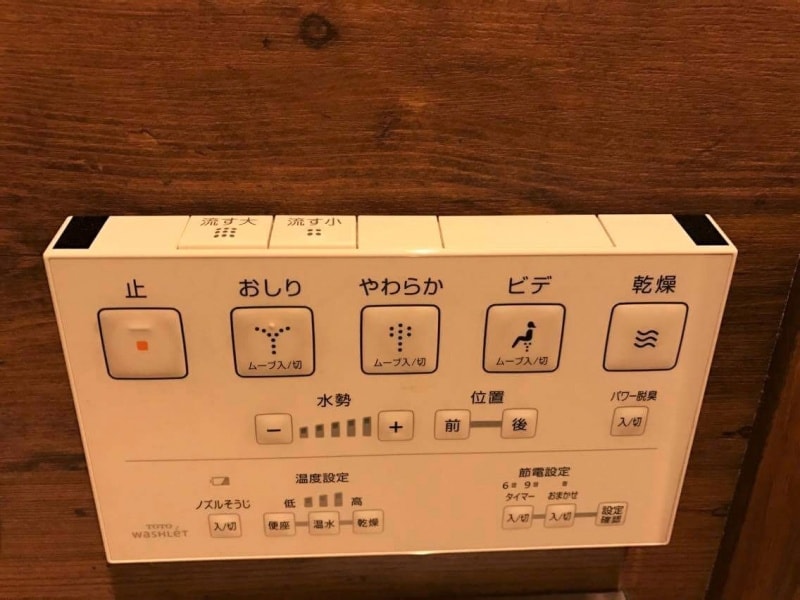 I have no idea what the buttons say, so I just started pressing them.  Next thing I know my bottom is being sprayed with warm water.  I pressed the next button and warm air starts to dry my rear; the next, and a pleasant scent wafts from the latrine.  Yes, I have experienced a bidet, but these Japanese versions are far, far more advanced than those French wannabees.

I must have been in the lavatory for at least 20 minutes cycling through all the options over and over.  I got up and pressed the flush button on the wall.  I then ran outside to tell Benjy, you gotta go try the toilet!!

So Benjy goes in the men’s bathroom and is back in about 2 minutes.

I said, “what did you think??”  He shrugged his shoulders and said, “nothing special happened.”  I asked, “did you sit down?”  He said, “no, I just peed standing up.”

I looked at him in exasperation.  This is a man who is the captain of a 767 airplane.  “You have to sit down, Benjy.  What did you think the toilet was going to do, reach up and grab you?”  He shrugged his shoulders again and went back in.  He came back out but clearly wasn’t as impressed as I was.

So, I discovered that most all toilets in Japan have these features.  Go to a train station, a 7-11 store or any restaurant, and they all have the same options, well, except for the air dryer, that feature was less common.  I did discover that the purpose of the music/babbling brook is to cover any bodily noises that might slip out while you’re doing you know what.

On a lesser level than the potties, I was also impressed with the 7-11 stores in Japan.  You can buy very high quality prepared food there, nothing like the roller dogs you see in the U.S. that are perpetually spinning in the warmer for heavens knows how long. 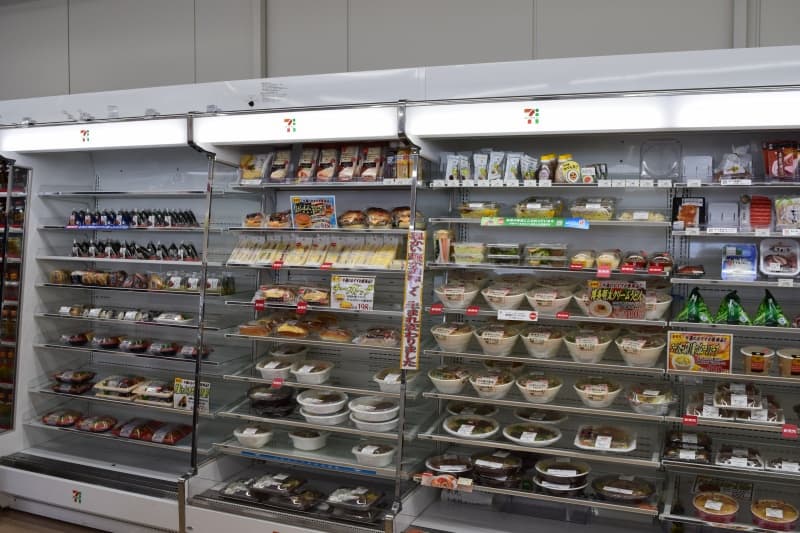 I have a friend who is a food science professor in Hong Kong and he told me that Japan is 20 years ahead of the rest of the world in terms of its prepared food storage.  Who knew?  Before our trip to Japan, he told me that the Japanese are able to provide high quality prepared food that’s fresh and tasty because of their food preparation facilities and not because of any chemical preservatives they put on the food. I was intrigued by this tidbit of knowledge and decided I wanted to see for myself.  So, here’s what we got: 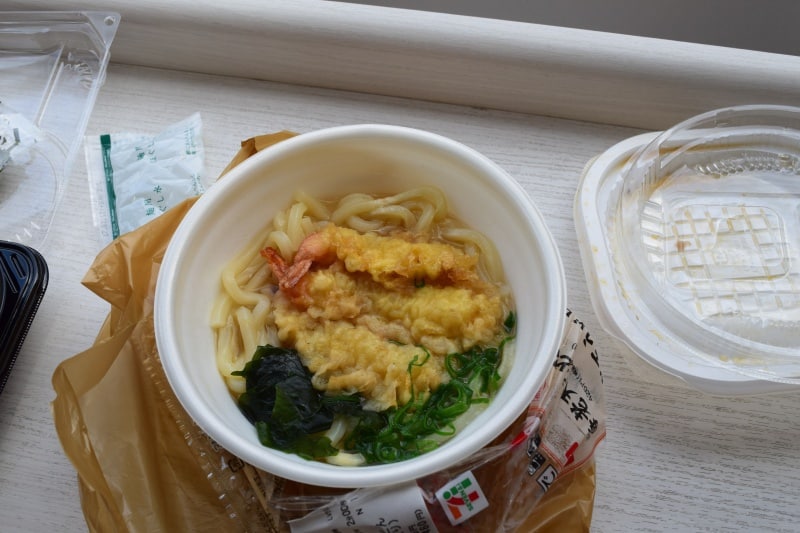 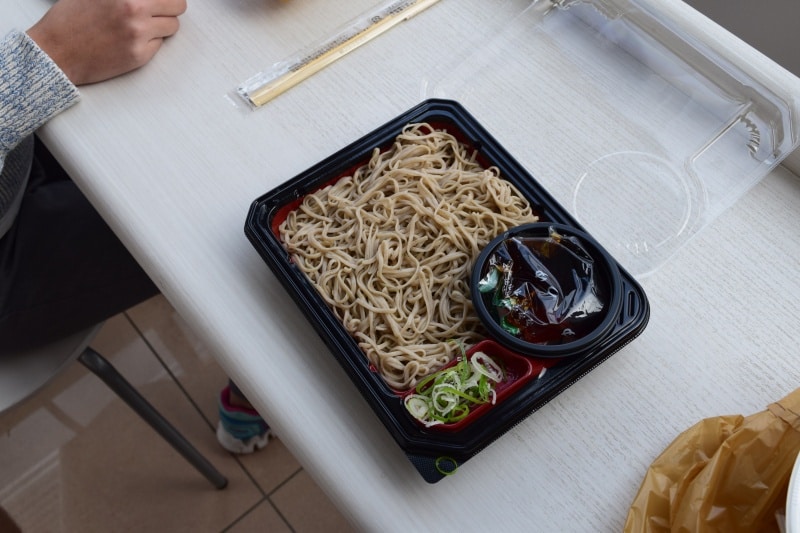 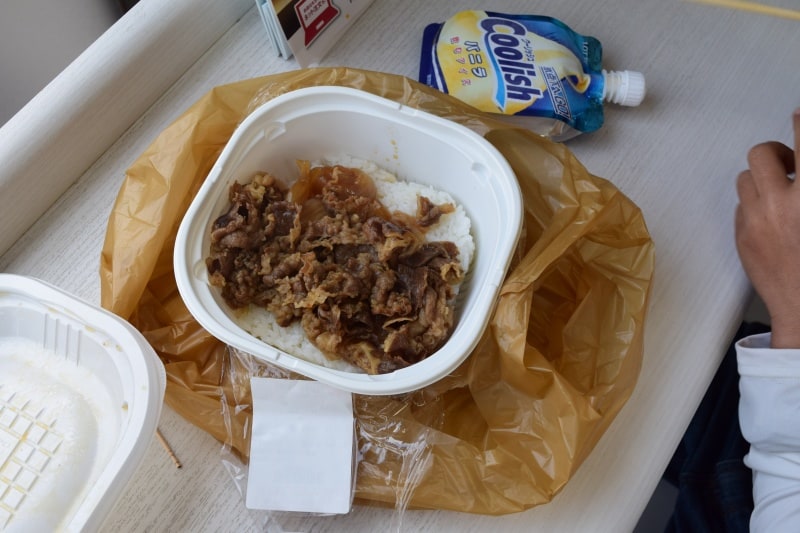 The food is inexpensive, tasty and convenient.

Over Thanksgiving break, we headed to Japan.  This was our first visit to the Land of the Rising Sun.  The Solethers, some friends of ours from Jacksonville, recently relocated there, so we decided to check in on them to see how they were getting along with their new life overseas.

The husband, Jared, works for the U.S. Navy and got 3-year orders at a base located in Saesbo.  Since Benjy is now a retired Navy veteran, we all have military identification cards and had access to the base.  We were like kids in a candy store shopping at the commissary and exchange.  The commissary is a U.S. grocery store, stocked with all the goods we miss so much and at prices even cheaper than what we remember.  We stocked up on the precious goods and lugged them home in our suitcases.

After our base excursion we went grass sledding. 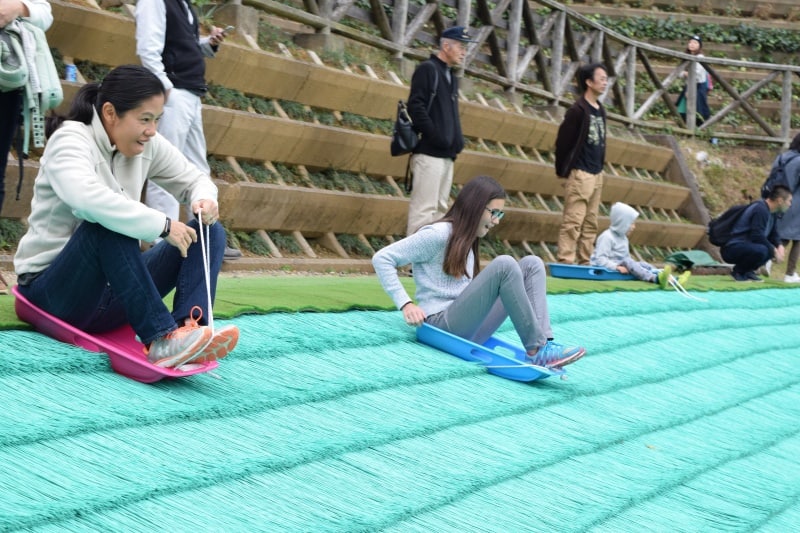 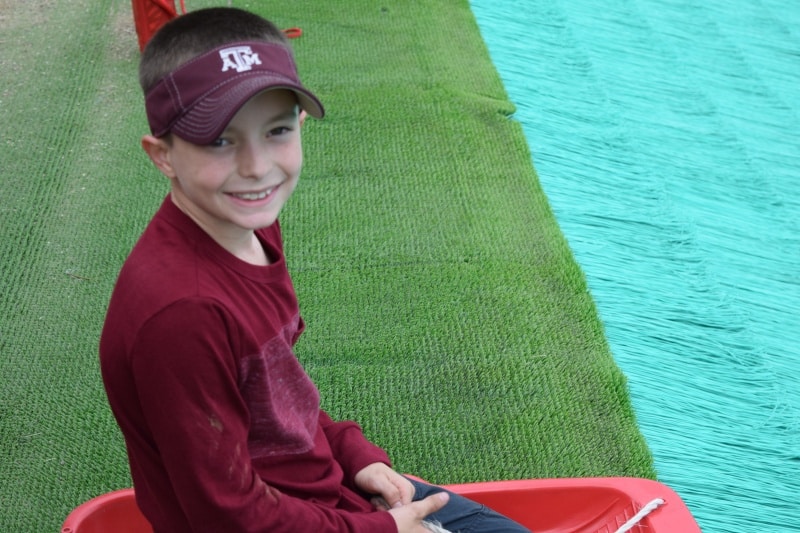 We did some hiking. 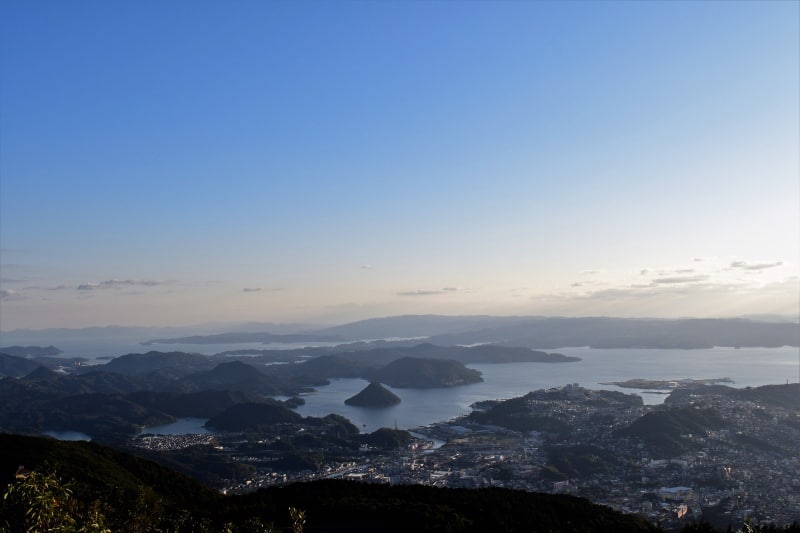 Took a cruise on the Pearl Queen to see the 99 Islands. 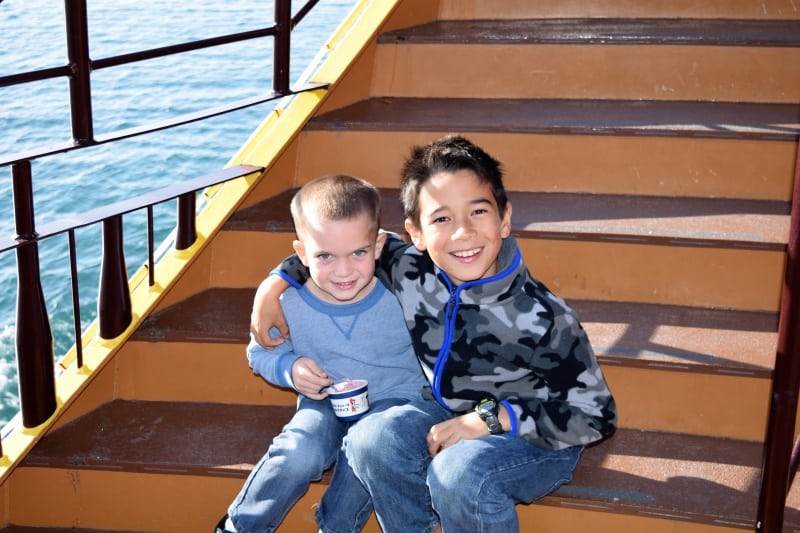 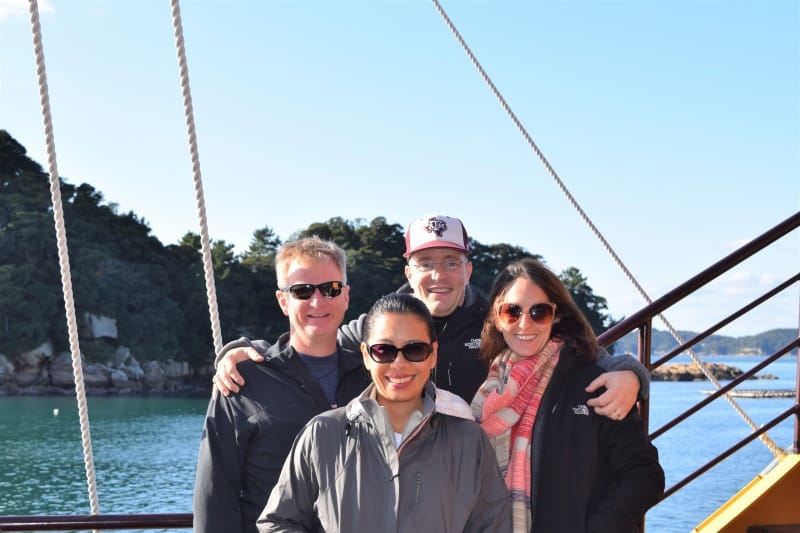 We also had the privilege of having a traditional American Thanksgiving Dinner with Jared’s co-workers.  It was truly a treat to feast on fried turkey, glazed ham and all the trimmings.

Webley and Aaron are WWII buffs, so we made the 2-hour trip to Nagasaki to visit the atomic bomb museum.

This is a statue that marks the hypocenter of where the atomic bomb exploded. 150,000 people were killed in the blast.  This is a monument erected to remember those who died, many of whom were women and children.  The plaque on the statue shows the exact time and date of the explosion. I’m not going to debate the wisdom or justification for the U.S. dropping the atomic bomb on Japan.  Surprisingly, nothing at the memorial or the museum does so either.  All I know is that my heart was very heavy touring the site.  It grieved me to think about all the suffering that took place on this ground.

I’ve spoken to friends who have lived and worked in Japan and they tell me that children are not really taught about World War II in school, so there is a general ignorance of Japan’s role in it.  Interestingly, the atomic bomb museum was very well done and even-handed, unlike some of the other one-sided, propaganda-laden displays I have seen elsewhere.  The museum did discuss Japan’s imperialistic ambitions at the time, its invasion of other Asian countries and the bombing of Pearl Harbor.  It made me wonder what today’s Japanese think when they visit a place like this.  It was an interesting, thought provoking place and another entry in our homeschool field trip log.

Visiting with friends from back home on this side of the planet is like eating a favorite food that you haven’t had in a long time.  Before you have it, you don’t really realize how much you missed it.  But once you do, you savor it and appreciate every minute and it ties you over until your next hit.  That’s what it was like for us visiting the Solethers.  It was a rich blessing from the Lord for which we are deeply grateful.